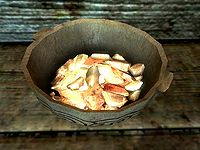 Moon Sugar is the unrefined form of skooma but, unlike skooma, the substance does not seem to be illegal, as it can be purchased from many apothecaries.

In terms of combinations of two ingredients, Moon Sugar can be combined with 55 other ingredients.