Senchal (also spelled Senchel)[1] is one of the eight major cities in the province of Elsweyr,[2] serving as the largest settlement in the Quin'rawl Peninsula and the capital of Pellitine.[3] Senchal is known for being an infamous, yet an influential port-city among southern Tamriel. Filled to the brim of crowded bazaars and open-aired markets. The highly-populated harbor contains all sorts of pirates and smugglers that operate across the Southern Sea, and the Topal Bay.[4] Senchal was one of the original sixteen kingdoms of Elsweyr,[5] known for their harbors and nautical people.[6]

Senchal is found in the southern rainforests and river basins of Pellitine, it is built on strategic grounds in the coastal highlands of the Quin'rawl Peninsula. In fact, the region's population is mainly centralized in the Senchal region, in both the city and the nearby port-town of South Guard. The Senchal Sound is sporadically populated by the occasional whirlpools and water eddies. The city is built on a hilltop that overlooks the bay, crowned by the Senchal Palace. The main city itself contains a motley assortment of open-aired markets, bazaars, and stone buildings, all of which circle around the central square. As the city openly dissolves into the outskirts, shanty-towns, and ruins from the many fires are cluttered about. Because of its location, Senchal is the meeting spot of several criminals and gathering of illegal goods,[4] even fresh corpses ripe for the pickings of the Sload.[7] There are several city districts in Senchal, all of which are led by their respective clan leaders.[3] These include the harbor district, Dagi's Pride, Squint-Eye,[8] but the most notorious is the underground slums known as Black Kiergo, the source of the Knahaten Flu when it broke out in Elsweyr.[9] Senchal is neighbored by several settlements, one of them being South Guard to the west.[2]

The Kingdom of Senchal & the Second Empire[edit] 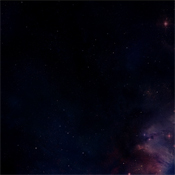 Senchal gained power when the new moons were out

Much like the other major cities, Senchal was founded many years into the Merethic Era as one of the original sixteen kingdoms of what is now Elsweyr. It was founded by the eponymous clan of nautical-folk and shipwrights that favored the harborage that served as the city's foundation. The town had grown in size as dwellings and businesses started to form, but the city has notably used stone in their architecture after these buildings started to catch on fire. A class system evolved in Senchal, among the honest tradesmen to the dishonest. Out of this, the modern-day slums of Black Kiergo were created as a place for the thieves and ruffians that did not benefit from the caste.[3] In that time, power between theses kingdoms shifted depending on the phases of the moons. For example, when the moons are both in syzygy (new moons), the Kingdom of Senchal gains prominence across the lands. These kingdoms lived together in harmony, often working with each other's primary skill. That was until the Thrassian Plague in 1E 2260, when these kingdoms had fallen and were slowly absorbed into two kingdoms. Senchal's destruction is attributed to the people's panic, who burned down buildings to kill the sickened, beginning with the slums of Black Kiergo.[3][9] What remained of Senchal was brought into the Kingdom of Pellitine.[5][10] 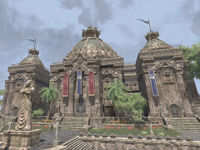 The Palace of Senchal

Senchal's early years after the plague was prosperous, the city was efficiently rebuilt both physically and socially. While Black Kiergo continued its infamous reputation, the city itself became the capital of Pellitine considering it was the largest city at the time. Although, clan identity was no longer a measure of power, only what is contributed to the community, a model that was taken from the Bretons and the Imperials. Regardless, the political situation in Senchal was fair and stable. By 1E 2920, the city was ruled by the Mad King, Dro'Zel and his wife, Queen Hasaama, a couple that held a strong connection with the Second Empire. King Dro'Zel was an infamous leader, known for his eccentric personality and high connections. But his most egregious action was summoning Molag Bal to destroy the town of Gil-Var-Delle.[11] In time, King Dro'Zel became a servant of the then Emperor, Reman Cyrodiil III and relations between the Kingdom and the Empire strengthened.[3]

However, political change came much harder with the formation of the Elsweyr Confederacy, between Queen Eshita of Pellitine, and King Keirgo of Anequina in 2E 309. Since then, stability in the province shifted between peaceful times to a great power struggle between two ideally-different nations that threatened foreign intervention.[4] The tension was later followed with a mass scandal in Senchal, the assassination of the Potentate, Versidue-Shaie in 2E 324, at the city's palace by a burgeoning faction known as the Morag Tong, who displayed their name in his blood.[12] Before the family could seek consul from the Potentate, the provincial mayhem had reached a climax. Thus leading into the sacking of the capital, Ne Quin-al and the slaughter of the royal family in 2E 326 by rebels.[4][10] Amidst the downfall, the people of Senchal reverted to their modern traditions and social structures to stay strong. That was until the disaster two centuries later.[3] 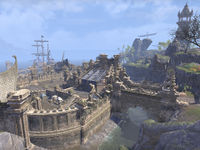 Ruins from the Fires 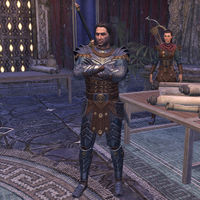 In 2E 560, the Knahaten Flu had sprung from the bowels of Black Marsh until it reached the skooma-dens of Black Kiergo. The clan leaders of Senchal dismissed the flu as a toxin in the skooma, however, it soon spread into Dagi's Pride and Squint-Eye, until it left the city for Alabaster, where it would spread across the province.[8] Much like with the Thrassian Plague, mob fires were seen as the solution and the slums were razed to the ground, but the fires had spread not only across the city, but into the surrounding region, encompassing nearby South Guard. Some people were killed by the disease (among them was Governor Z'har Tuslaz of Senchal and members of the royal Pellitine bloodline), while other people died from the smoke and fumes.[13] It took many years for Senchal to fully-recover from the damage while it was cut off from the rest of Tamriel.[3]

The malcontent had swiftly takeover Senchal in the void left by the flu, leading to dark times in the city's history that continued the senseless destruction. But in 2E 577, the Empire of Cyrodiil, led by the recently-crowned Emperor Varen Aquilarios had aided the city's recovery period in the form of doctors[14] and the Thirteenth Legion. General Meric Renmus led the legion and took control of Senchal Palace, slowly but surely bringing law and order into the ruined city-state. However, when the Planemeld led to the disappearance of the Emperor, the Thirteenth Legion was left to their own accord and gained favor from the local populous, earning the name, the Shields of Senchal. Meric Renmus had successfully driven the criminal world into the underground remains of Black Kiergo while maintaining the peace for a couple of decades.[13] In 2E 580, the Speaker of the Mane, Gharesh-ri had signed the Elden Accord with the Altmer and the Bosmer, leading to the formation of the First Aldmeri Dominion and the alliance's help in resolving the flu epidemic across Elsweyr.[8]

In 2E 582, Dragons had re-surfaced across the province of Elsweyr, wreaking havoc across the countryside between the northern wastelands to the southern rainforests. The threat of Dragons had greatly loomed over the Quin'rawl Peninsula, burning down the villages and farms across the region that displaced them into Senchal. At that time, the former captain of the Dragonguard, Sai Sahan had appeared in the city to gather forces to face the Dragon threat, but was denied warriors by General Renmus to hunt a dragon that roosted in the island of Tideholm, so that Senchal was not left undefended. His daughter, Aeliah Renmus joined Sahan's taskforce to raid the island and subsequently joined the reformed Dragonguard.[15]

The threat of Dragons became more apparent when the Order of the New Moon began to appear across Senchal. Countless refugees had flocked to the cult as they preached their gospel across the streets. The people's perception of the cult hood ranged from contempt to concern as it encouraged the denial of the old gods in favor of their lord and the New Moon.[16] The Dragonguard had approached General Renmus to help investigate the disappearances across town and attempt to infiltrate the cult. As more and more people joined the order, extra measures were taken to recruit more suitable applicants. The order's Dragon Priest became acquainted with the arena master, using his tournament to attain strong warriors. The Dragonguard were able to win the arena match and learn about the cult's intentions.[17]

Eventually, the Shields of Senchal became involved in the defense of the region against the Dragon incursion, as the Dragonguard prepared for the final fight against the new moon cult's dragon-lord, Laatvulon. One of the Shields' battles occurred higher in the region, on the highlands near the west sentry tower.[18] The dragon conflict came to an end after an assault on Dragonhold that led to the island's subsequent destruction and the death of the dragon-lord, Kaalgrontiid.[19] For their resilience, Queen Khamira of Anequina had offered the Shields, and by extension the city-state of Senchal membership that would re-establish the Elsweyr Confederacy. It is unknown whether they accepted their offer but Senchal was liberated from the dragon threat.[20]

Senchal in the Third Empire[edit]

As the Tiber Wars had left Elsweyr in utter ruins, the province refused to stand down from the adversity of the Third Empire. Despite the chances of surrender given by General Pottreid, Senchal was among the last stand that marked the brutal end of the province's retaliation. The Sack of Senchal had been omitted from the Empire's official history due to the massacres conducted by the Imperial Legion. Men, women, and children alike were slaughtered by the Imperial soldiers until the city had forfeited and the province was absorbed into the Empire.[21] By 2E 864, the city remained in ruins, its air polluted with chimney-smoke and charred skylines since the fires of the Knahaten Flu. It has since been considered the ugliest city outside the Empire's jurisdiction. But after the Empire's claim over the province, Senchal's inland highways became heavily-guarded, shifting illegal activity directly to the city's harbor. All the while, Black Kiergo had surfaced into the open and its streets filled with sugar-dens and junkies.[4]

During the Imperial Simulacrum in the late-Third Era, the city-state of Senchal was an active settlement. It was ruled by King Huskir and had a rivalry with Alabaster.[22]

In the waning years of the Third Era, in 3E 432, Senchal went through a renaissance from the drug-capital of the Empire, to a coastal resort-town populated by powerful merchant-lords of Elsweyr. Although, this change came from the increase of moon-sugar export that expanded multi-fold in the past twenty years. The kingpin, Ya'Tirrje the Gold Cat is said to have an extravagant villa in Senchal and the abundance of money that pays for the city's strong security. From his home, Ya'Tirrje continued his enormous drug-ring that encompassed other major cities such as Corinthe, Torval and Rimmen.[5]