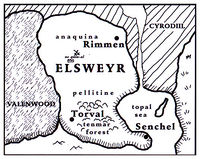 Senchal, the capital of Pellitine

Pellitine (also known as Pelletine,[1], Pa'alatiin in Ta'agra[2] and Southern Elsweyr)[3] was a kingdom in southern Tamriel. It merged with the rival kingdom of Anequina in 2E 309 to form the Elsweyr Confederacy, uniting the province for the first time.[4][2] Pellitine occupied the southern half of Elsweyr.[5] It is a region of dense jungles, rainforests, river basins, tropical grasslands, and pristine white beaches.[4][6]

In the early First Era, Elsweyr was known to consist of sixteen independent realms that cooperated with each other for their mutual protection and economic benefit.[2] Pellitine was one of the ports that traded with the burgeoning Imperial City.[7]

The devastating Thrassian Plague of 1E 2260 disrupted Elsweyr's delicate political balance, and when it subsided the original sixteen realms had consolidated into two survivors: Pa'alatiin and Ne Quin-al, or Pellitine and Anequina as they were known in Cyrodilic.[2] The two kingdoms fell into a bitter, often violent feud that stalemated for centuries;[4] Anequina had developed a disciplined warrior culture, but Pellitine had wealth enough to hire mercenaries thanks to its fertile lands and the cultivation of Moon Sugar derived from the Tenmar Forest.[2][4] The feud finally ended in 2E 309, as the kingdoms' rulers, Keirgo of Anequina and Eshita of Pellitine, married and united their realms into the Elsweyr Confederacy. While this move sparked a tribal revolt in Anequina that threatened to sunder the two kingdoms once more, Mane Rid-Thar-ri'Datta quelled the unrest by instituting a power-sharing system between the tribes and the nobility based on the phases of the moons Masser and Secunda.[4][2]

By the time of the late Third Era, the Khajiit of southern Elsweyr were considered settled city dwellers with ancient mercantile traditions and a stable agrarian aristocracy based on sugarcane and saltrice plantations. Compared to the northern nomadic tribes clinging to traditions, the settled south had been quick to adopt Imperial ways.[8]

In 4E 115, the Thalmor backed a coup that dissolved the Elsweyr Confederacy. In its place, the kingdoms of Anequina and Pelletine were reestablished and made client states of the third Aldmeri Dominion.[1]