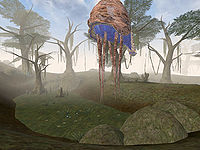 The Bitter Coast, named for the salt marshes along the coast, was the part of Vvardenfell's coast nearest to the mainland of Morrowind. This largely uninhabited area was in the far southwest of Vvardenfell and lay between the mountains of the West Gash to the east, the Sea of Ghosts to the north, and the Inner Sea to the west.[1] The northern boundary of the region was generally considered to be marked by Khartag Point just north of Gnaar Mok, the Odai River the east, to and it followed the coast south and eastward through the tiny fishing and smuggling village of Hla Oad and the Imperial outpost at Seyda Neen, finally merging into terrain more reminiscent of the Ascadian Isles just west of Vivec. The Firemoth region is sometimes considered part of the Bitter Coast.

The Bitter Coast was dominated by humid, putrid swamps and salt marshes. The giant bull netch floated gently through the air, fearing no cliff racer or mudcrab, and hunting was considered fair.[1] Off the coast, divers found kollops with pearls, but even more slaughterfish and man-like dreugh with their hard shells and tentacles. Herbalists came to this region to harvest the various mushrooms, pods, and flowers which thrived in the marshy environment.[1] The region was also known as The Smuggler's Coast, since the secluded coves and islands were littered with smugglers operating out of their hidden caves. The ever-present fog and rain provided additional cover for their boats. No major action had been taken to curtail their actions, as many smugglers counted on support from locals unhappy with high taxes on liquor.