The UESPWiki – Your source for The Elder Scrolls since 1995
< Lore: Bestiary: Fish
Jump to: navigation, search 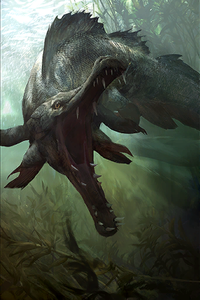 Slaughterfish are small, aggressive fish with razor-sharp teeth found in the waters of nearly all of Nirn and even in other realms such as Coldharbour.

They are often found in large groups that will swarm unwary prey quickly and lethally, some specimens have been known to grow at least twice as large than average due to plentiful meals.[1] Slaughterfish tend to prefer foul waters[2] but can thrive in a variety of aquatic environments across Tamriel, such as deep inland lakes and underground rivers.[3] They have even been sighted in the heavily polluted, oily waters of the Clockwork City, where most other fish species had been rendered near-extinct.[4]

In both the Second and Third Eras, Lake Rumare in central Cyrodiil was known for its unusually large and aggressive population of slaughterfish, the infestation so extreme that by 2E 582, swimming in the lake was considered certain death.[5] By the time of 3E 433 and the Oblivion Crisis, the slaughterfish population had diverged into two species, with the appearance of the Rumare slaughterfish, a larger variety native to the lake.[6]

The slaughterfish of the Iliac Bay are known to average around six feet in length.[3] In the Wrothgarian Mountains there are records of a rare breed of slaughterfish known as the Crab-Slaughter-Crane, that is said to be big enough to "swallow a mudcrab and a crane in one gulp".[7] Other larger variants include the blind slaughterfish and the electric slaughterfish.[8]

With this fish being so prevalent, slaughterfish bites are a somewhat common occurrence and dangerous enough to maim limbs.[9] This has lead to a lucrative market for slaughterfish preventatives and cures, with products ranging from alchemical slurries marketed as repellents, to books full of remedies, the success of these products have been mixed.[10][11] Some fishermen were known to use enchanted bobbers which glow green in the presence of slaughterfish.[12] Another health risk associated with the fish, is that it is a carrier for the Greenspore disease, which can cause mental issues such as dementia.[13]

Various parts of the slaughterfish have been found to hold value, their scales and eggs are prized by alchemists for their alchemical properties, while their sharp teeth prove useful when used to enhance grappling hooks.[14] They are also fit for consumption and due to the species' widespread range, there are numerous culinary traditions involving slaughterfish. In Vvardenfell, the scales are dried and consumed as a "crunchy treat" by the locals, whilst disdaining slaughterfish flesh, describing it as "meally and noisome".[15] However, in Nordic areas, such as Bleakrock Isle, stone-cooked splayed slaughterfish was considered a delicacy, while on the mainland, seared slaughterfish is a common meal.[16][17][18] Both the Maormer and sailors are known to smoke slaughterfish while out at sea by using fire salts for cooking.[19] Meanwhile in the heartland of Cyrodiil, slaughterfish pie was well known in the Lake Rumare area.[20]