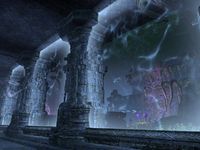 Water Magic is an obscure and little-known form of magic involving the manipulation of water.

On Tamriel, water is composed of memory. When a mortal dies, his or her memories become water, and in this way all the memories of Tamriel's histories are stored within its waters. This fact is considered to be one of the most dangerous secrets about the natural order of the world, and is therefore closely guarded by the Demon of Knowledge Hermaeus Mora. Achieving a true understanding of this principle requires a lifetime of study and contemplation, but in the wrong hands this knowledge can be extremely dangerous.[1] For example, circa 2E 582 the water spirit of Halcyon Lake, a nereid named Lorelia, attempted to twist the natural order by stealing the memories of her mortal followers to prevent the desertification of her lake, forcing the servants of Hermaeus Mora to intervene.[2] The burial grounds of Honor's Rest had memorial pools that allowed one to view the past through the eyes of those involved in the Siege of Orsinium.[3]

Argonians are known to utilize water magic. One example of this is the Lakemire Xanmeer located within the Deepmire region of Black Marsh, where an Argonian master of water magic created subaquatic viewing windows into a nearby lake composed entirely of water.[4]

Sea Sloads have also been known to use water in their magical rituals. During their attempt to sink Summerset into the ocean circa 2E 582, the Abyssal Cabal and their allies in the Court of Bedlam used abyssal pearls to create magical geysers across the island.[5] The Sea Sloads grew these pearls through arcane rituals, which involved drawing sigils in the water and adding alchemical mixtures to make the sea glow with arcane light.[6] However, the pearls themselves were powered through some form of Soul Magic.[7]

Sea Giants are capable of wielding powerful magic to control water. Examples of such magic include flinging orbs of sea water at their foes and guiding surges of water to crash down on their enemies.[8]

The Order of the Eye are known to use scrying-bowls with water to utilize their sight. Sometimes bog-water is used in the ritual, but other times they use tea water because the leaves and seeds can apparently help break through persistent visions.[9]

The Ayleids of the Strident Coast utilized a weapon called the Sphere of Storms, which manipulated the waters around them to either defend their coastline, or provided for the people such as water crops or speed ships through the sea. One of the last spheres are currently used by the Stormwardens of the Ilayas Ruins, to protect the Broken Coast region of Malabal Tor.[10]

The fictional Tale of the Sister Who Turned Her Skin Red, a Reachfolk legend, mentions the witch Ulecia, who wielded powerful Water Magic. According to the tale, she was capable of feats such as summoning a river of water powerful enough to uproot a tree and altering the taste of the water to that of mead.[11]