This article is about Sea Giants. For general information, see Giant. 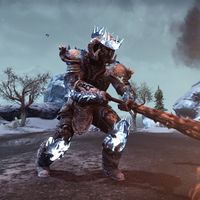 Sea Giants are a species of giant with silvery blue skin that is rarely seen on Tamriel. They're perceived as smarter and more malicious than Giants that dwell on land.[1][2] Sea Giants are rare enough to be creatures of legend, and have appeared in Nord maritime tales dating back to the First Era. Little is known about their culture and behavior.[3] They are capable of speech, and have been witnessed speaking their own language as well as common dialects such as Tamrielic.[4][5] Sailors have claimed to witness Sea Giant vessels in the frozen wastes of the Sea of Ghosts. These ships are the size of islands, and are armed with jagged spears. However, these accounts are considered to be widely exaggerated.[3] They allegedly only make landfall during the coldest winters, and never stay for long. They slaughter and pillage, then vanish in the ice and fog.[1]

Sea Giants are capable of wielding powerful shock and frost magic.[6] They can also use magic to control water. Examples of such magic include flinging orbs of sea water at their foes and guiding surges of water to crash down on their enemies.[7] 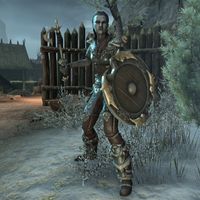 A half-giant, kin to the Sea Giants

Fishermen's tales suggest that Sea Giants are very unlike their landlocked cousins, who herd mammoths for cheese and meat. Mammoth herders form an alliance with their herd and live in harmony. In stark contrast, Sea Giants are cunning, efficient, and fearless predators with no such peaceful herding practices to speak of. Sea Giants are capable of complex tool usage and group coordination to hunt whales, which lurk beneath the ice and are the Sea Giants' natural prey.[3] Very few Nords have ever seen a Sea Giant, as according to sailors, "Anyone who sees one doesn't survive to tell the tale".[5]

Sea Giants have a sturdy frame, gargantuan strength, and resistance to cold that makes leaping into the frigid northern waters and wrestling with their quarry ideal. It takes half a dozen or more Giants to incapacitate an adult whale. They carve their prey while it's still alive, tearing into the whale until blood loss and shock set in. Sea Giants hunt whales with a tool that is carved of bone, have pointed ends similar to harpoons, and are wider than a Nord's thigh.[3]

Weaponry and elements of apparel of Sea Giants is often crafted from whale bones. They are known for their high quality bone harpoons. Clothing of Sea Giants is often festooned with skulls and long, serrated teeth. Their armors are made of combination of boiled horker leather, whale bones, horker tusks and scales and teeth of fish. It is believed that Sea Giant's quivers are made from horker leather and that their arrows are tipped with feathers from the wings of seafaring birds. Their shoulder pads are often stylized with ship imagery.[8]

Sea Giants are believed to be linked to tales of ancient giants and Atmoran titans. The elderly Nord woman Thengret grew up in a fishing village west of Dawnstar, with her grandmother saying that Sea Giants raid the coast when "the Pale grows frigid as a draugr's heart, horkers freeze to death on the rocks, and trolls weep from the bitter cold". She claimed to have seen them during a winter in 2E 532, when standing on the coast in a frosty gale, she saw a Sea Giant longship gliding through the snow and sleet.[5]

Two years into High King Svargrim's reign around 2E 563, a Sea Giant armada lead by Kruntharth landed on the shores of Western Skyrim and besieged the walls of Solitude. Svargrim and his soldiers downed Kruntharth and drove the rest of the Sea Giant pirates back to the ocean.[9]

In 2E 582 a fleet of Sea Giant raiders and their half-kin, led by Vampire Lord Falgravn, stormed the shores of Kyne's Aegis.[10] It is unclear what their motive was, or how they came under the direction of Lord Falgravn. Their siege lasted days, but they were eventually pushed out by Thane Ogvar and hired help from the Undaunted.[10][11] One of the Sea Giants' commanders fought alongside his pets Sea Adder and Gryphon.[12]

Very little is known about the language of Sea Giants, however the following words and sentences are known to be used in the context of conflict and battle: