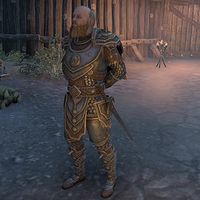 Thane Ogvar is a Nord in charge of the operation to remove the vampires and giants from Kyne's Aegis.

Before accepting the quest, you can hear him barking orders at his troops.

Thane Ogvar: "Reinforce the palisades! We can't lose the keep!"

He then notices you.

Thane Ogvar: "Please tell me you're our reinforcements. You look like exactly what we need to save Kyne's Aegis."

Speak with him to begin the quest.

"Come to help us, eh?
I hope you brought some sturdy friends. I wager Stuhn himself would struggle to turn back Lord Falgravn and his Giant allies."
Lord Falgravn
"Aye. A blood-drinking beast. A fiend of ice and fog.
The sea's been rough for days, you see. Bitter winds, cold rain that rakes at the eyes and clings to your beard. Thought it was just foul weather. But then we saw Lord Falgravn's longships."
So, Falgravn invaded Kyne's Aegis?
"Not just him. Sea Giants and their howling half-kin. I'd heard tales of sailing Giants, sure, but I never thought they were true.
Look, we'll fight to the last. None of us intend to meet a straw death. But against vampires and Giants? We need help."
All right. My allies and I will help defend Kyne's Aegis.

You can ask him more questions about the situation after accepting the quest.

"Kyne bless you, friend.
We can't hold this position much longer. We need to push Lord Falgravn's forces back north. My swordthanes and I will be right behind you. But if we fall … well, I'll lift a mead to you in Sovngarde."
Tell me about these Sea Giants.

"They're not simple like the Giants on the mainland. No, they've got a cunning to them.
Skin's as blue as a frost-bitten toe. And as far as their temper goes? I've met sharks with a kinder disposition."
You mentioned half-kin?
"Aye. Men half again taller than the tallest Nord. Some kind of half-breed, I reckon.
I didn't have time to ask—they were busy beating my soldiers to pieces with their clubs."
Why would these Giants join forces with a vampire?
"My grandfather used to say that Sea Giants only made landfall during the coldest winters and never stayed for long. They'd slaughter and pillage, then vanish in the ice and fog.
They're smart, I'll grant you. But they aren't complicated."
So, Lord Falgravn offered them a chance at plunder, and they took it?
"Probably. But who knows? I hear vampires can twist people's minds—make them see what they want to see. Maybe Falgravn put a hex on them. Chances are, we'll never know.
As long as they're all dead at the end of this, I won't lose sleep over it."

Tell me more about Kyne's Aegis.

"Not much to it, honestly. A sturdy fort, a fishing village, a rocky coast, and some ruins.
Its value has always been its location. Shoals and old wrecks make sailing out here dangerous. Anyone who means to visit the mainland has to pass by us."
So that's where the "Aegis" comes from?
"Aye. We're the coastal shield of Haafingar. Or, at least we should have been.
Shor's bones, if only I'd paid more attention to the state of our defenses! Maybe we could have …. Bah. No use wringing my hands over it now, I suppose."
Are there any survivors left out there?
"Beyond the walls? Hard to say. Every time we try to mount a counter-attack, we limp back five swords fewer.
With your help, maybe we'll find a few comrades still standing. Not holding out much hope, though."

What else do you know about Lord Falgravn?

"Like I said, he's a vampire … or something near to it.
Legends say he was a pirate. He and his crew set upon a whaling vessel, but when they went below decks to claim their prize, all they found was corpses and bloodfiends."
How long has he been at this?
"Traveling the Sea of Ghosts, you mean? Ages and ages. Since Ysmir's reign. He vanishes for a few hundred years at a time, but he always comes back.
At least, that's the tale. Who knows if it's true. All I know for certain is that he's here now."
What does he want with Kyne's Aegis?
"Hard to say. If he intends to mount an invasion on the mainland, Kyne's Aegis is a good place to start.
But, I don't know. They mean to slaughter us, for certain. But seems to me he's got his soldiers looking for something. Something on the island."
Any idea what that might be?
"None, I'm sorry to say.
There are a few ruins on the island. Dragon Cult built them, I wager. We use them for storing mead, tools … anything that doesn't mind the damp. Maybe there's something in there we missed."

When you rescue the first soldier and their charge, Ogvar calls them over to safety.

Thane Ogvar: "This way! Rally to me!"

When you rescue the second soldier and their charge, Ogvar calls them over to safety.

Thane Ogvar appears behind a wall with Farlia, Nelgarde, Sojak and Hakstar just before you reach the first Half-Giant Storm Caller. The group comes down upon a swarm of three Vampire Foot Soldiers.

Thane Ogvar: "Attack! Bring them down!"

Thane Ogvar: "Ha! That's how you earn a place in Sovngarde!"

After killing Yandir the Butcher:

Thane Ogvar: "You … you killed it? Ha! We might have a chance against Lord Falgravn after all!"
Thane Ogvar: "Forge ahead! More thanes are mustering in the village. We'll set out again once we reinforce the gates."

You can speak to him before entering the Span.

"I can't believe you killed that thing. A Sea Giant!
Just be careful, eh? Lord Falgravn will take notice. We've avoided his gaze so far. We should try to keep it that way for as long as possible."
Do you think you can hold the village?

"Aye, for a few hours at least. Seeing you beat the brine out of those Half-Giants lifted the spirits of every man, woman, and child in Kyne's Aegis.
You lit a fire in our bellies, friend, and we're ready to fight!"

What can I expect to find up ahead?

"We call this bit of the island the Span. Small mining outposts, mostly. Had a brief gold rush here a few years back. Nothing came of it, but some prospectors never quit, you know?
Word of advice: keep an eye on the sky."
What do you mean?
"You know how I told you the weather turned foul? The Span's caught the worst of it. Can't take more than a few steps without seeing a lightning strike up there.
Just be careful, all right? Bad enough you've got Giants and vampires to contend with."

Did the vampires or Giants take an interest in the Span?

"Now that you mention it, yeah. Lord Falgravn's troops cleared out the caves first.
I figured they just didn't want to be caught by surprise as they marched on the fortress, but maybe they were looking for something."

Thane Ogvar: "I never thought we'd make it this far north! Lord Falgravn must be nearby."
Thane Ogvar: "We'll hold this point to make sure their forces are contained."
Thane Ogvar: "The Sea Giants landed in the cove below. Keep a sharp eye out, eh?"

"Fight on, my friend. We will follow soon, I swear it."

On the way to the ruins, after defeating Captain Vrol:

Thane Ogvar: "Just one more push, and we'll have this vampire by the throat!"

He and Captain Lilmyra will meet you in front of the ruins.

Thane Ogvar: "Lord Falgravn's in that ruin ahead. He … he took some of my soldiers!"
Captain Lilmyra: "We're no match for that blood-drinker, but you are. Please … save our thanes!"

You can speak to him here.

"I wish we could follow you, but against a foe like Lord Falgravn, we would only get in the way.
It feels like cowardice, but I'm old enough to know the difference between a fool's death and a death worth dying. Nonetheless, forgive me."
What's he planning to do with your soldiers?
"I don't know. I truly don't. But my heart tells me it ends with their death.
I heard a great crash of thunder and felt a rumble underfoot. He's working some magic in there, friend. Eight help us if he succeeds."

After Lord Falgravn is defeated, he and the good captain enter the ruins.

Thane Ogvar: "You're alive! Mara's mercy, what is this place? I had no idea this was down here."
Thane Ogvar: "A cruel, bloody business. But the Giants are in retreat, and Lord Falgravn lies slain. We have you to thank."
Captain Lilmyra: "The dead thank you also, from the mead halls of Sovngarde! Perhaps one day, you may drink among them."

Speak with him to end the quest.

"I had no idea our island hid such horrors. I'll see to it that this evil place stays buried and forgotten.
The secret dies with Lord Falgravn."
What's going on outside? Is Kyne's Aegis secured?
"Aye, Lord Falgravn's forces are in full retreat. The few you left alive, anyway! We'll rid ourselves of the rest within the hour.
This tale would have had a very different ending if you and your allies hadn't shown up. Thank you, my friend."

Speaking with him after the quest:

"Now, the grim work begins. Burying the dead, repairing our homes …. Much to do. But mark my words: Kyne's Aegis will emerge from this stronger, fiercer, and more vibrant than it's ever been.
I weep for the fool who tests us again!"
You said you'll bury this place?
"First chance I get.
I was a fool to leave this ruin unexplored. The old Dragon Priests kept a lot of secrets—all bad. You have my word that as long as I draw breath, no one will ever step foot in this accursed place again."
What do you think Lord Falgravn was trying to do here?
"Draw the life out of my soldiers to increase his own power, I suspect.
I've heard tales of old barrows that suck the life out of people, animals … even creaky old Draugr! I'm just glad you stopped him before he had a chance to see it through."

If you didn't accept the quest at the beginning of the trial, you can get an Amulet of Bats off of his corpse to show Thane Ogvar on Normal or veteran.

I found this on Lord Falgravn's corpse. An Amulet of Bats.
"Shor's bones! Don't have to be a wizard to feel the magic on this. Thank you for bringing it to me. I'll hand it over to the town's clever woman for disposal.
We owe you a debt, friend. Take this. You more than earned it."

After completing hard mode on Veteran, you get a Bloodstone Chalice.

I found this on Falgravn's corpse. A Bloodstone Chalice
"Ugh. I don't even want to think about how much innocent blood filled this cup! We'll find a use for it, or we'll destroy it. Hopefully the latter!
We owe you a debt, friend. Take this. You more than earned it."

This Elder Scrolls Online-related article is a stub. You can help by expanding it.
Retrieved from "https://en.uesp.net/w/index.php?title=Online:Thane_Ogvar&oldid=2195259"
Categories:
Hidden categories: