Kyne's Aegis is an island found in the icy waters of the Sea of Ghosts, in the province of Skyrim. It is the coastal bulwark of Haafingar, since the seas are treacherous and riddled with ship graveyards, any that tries to enter the mainland from the west must go through Kyne's Aegis as a checkpoint. On the island's southern coast lies the large fortified-village of Kyne's Perch, while the hills on the north contains an old ruin from the days of the Dragon Cult. The hills beyond Kyne's Perch is known as the Span, which consists of several mining outposts that date back to the days of the island's gold rush.[1] 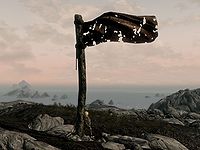 The abandoned island circa 4E 201

Many of the local Nords attribute the island's founding to one, Fuldimar Hookhand in 1E 244, sometime after the ascension of High King Vrage.[2]:5 However, the Dragon Cult ruins on the north coast implies a far older and darker history to the island.[3] In this case, the original settlement on Kyne's Aegis was built in the Merethic Era when the cult was still active. The temple was built inside of the mountain and continues underground into the crypts.

In the mid-Second Era, the island came under the control of Thane Ogvar and turned Kyne's Perch into a prosperous fishing village as well as a substantial stronghold. At some point, he established a mining operation throughout the Span, which brought about a brief gold rush that ended in failure. However, several prospectors continue to operate in the island's various caves. The ruins on the island was used as storage for mead and tools by the local populous, but not all of it had been explored.[1] In 2E 582, the Vampire Lord, Falgravn assembled an army of vampires, sea giants, and half-giants landed on the north end of the island and invaded Kyne's Aegis, all the while in search of something important.[4]

As Lord Falgravn took to the ruins, the Sea Giants Captain, Vrol led the siege against the island from Windswept Cove in the Span. A militia of the Undaunted took charge of the resistance and slowly advanced north toward Falgravn's position. All the while, they faced several enemy brigades and lighting strikes across the region until they reached the invasion force's landing spot. The Vampire Lord took several Nordic soldiers and harnessed the ruin's powers to drain their life energy and create undying thralls called Harrowfiends. In a final assault, the Undaunted warriors stormed the ruins and were plunged further down as the battle ensued. Eventually, the siege was dispelled and Lord Falgravn was defeated after years of terrorizing the seas.[4] Thane Ogvar made an effort to seal off the ruins for good and that Kyne's Aegis will never falter again.[1]

The island would soon become abandoned by the Fourth Era, with nothing notable other than a few gold ore veins and no trace of the settlement remaining, besides a skeleton wrapped around a flagpole.[5][UOL 1]