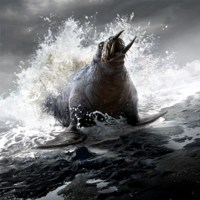 Horkers are aquatic mammal with three tusks, two long flippers and a strong tail. They are native to Solstheim, Skyrim, and northeastern High Rock. Although usually passive, they will attack when provoked or during mating season. Lake Fjalding is the mating grounds for the horkers of Solstheim. The chub loon partly displaced horkers that resided on the northern coast of Wrothgar due to them disrupting the food source of the horkers.[1] Horkers also possess a semi-resistance to ice magicka.[2] Horker is also a catch-all term used by Nords to describe sea mammals.[3]:115

The second sign of the Bloodmoon Prophecy involves dead horkers all along the coasts of Solstheim.

Horkers are actively hunted by the Skaal for their horns and meat, the Nords and Dark Elves also make use of the meat in meals such as horker pie, horker loaf, horker and ash yam stew and sweet horker stew.[4] The tusks are known to have some alchemical properties, but are mostly used for carving, netting hunters a nice bit of gold.[2] However, some Nords have been known to use the tusks as drinking horns.[5]