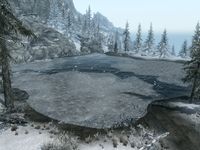 Lake Fjalding is the largest lake on Solstheim, although it is covered by ice year-round. It is commonly used as a mating ground for the horkers of the island. The Iggnir River to the south and the Isild River to the north meet here, in the Felsaad Coast region due north of Fort Frostmoth. The Isinfier Plains lie to the south. The Thirsk mead hall is on the eastern coast of the lake.[1]

The lake is surrounded by tombs and caves. Holly bushes sometime grow on its shores. An extensive cave system underneath it is said to contain many monsters and beasts and holds unknown treasures for brave adventurers. Residents of Thirsk and Skaal often comes here hunting horkers and the more elusive snow wolves and snow bears. It is also the frequent site of ritualistic hunts.

When the lake caught fire in 3E 427, the entrance to the Lair of the Udyrfrykte was opened, and that heinous monster returned to terrorize Solstheim once more.[2] The creature killed many residents of Thirsk before the Nerevarine, known to the Nords of Solstheim as the Blodskaal, confronted it in its lair and tore out its heart, which still remains on pedestal in Thirsk overlooking the once again frozen lake.[2]