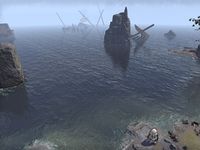 Waters of the Great Bay

Great Bay is the body of water found between the regions of Rivenspire and Wrothgar, serving as an extension of the waters of the Sea of Ghosts.[1] The northern area is much colder than the warm waters of the Eltheric Ocean.[2] A number of settlements are found along the coastline of the bay, most notably Northpoint, Old Orsinium, and Morkul Stronghold. The Jugular,[3] Grudge-Rock, and Two Rivers all feed into it. The inlet of its southernmost coastline forms the Shipwreck Cove, a harsh series of jagged rocks that many ships have fallen victim to.[4]

When Bendu Olo assembled the All Flags Navy, many shipyards were built throughout Tamriel to supply the fleet with ships. While the center of manufacturing was set in the distant Systres, some of the largest operations were based in Rivenspire.[5] One such shipyard was located on the Great Bay, east of the main road between Shornhelm and Northpoint. Over time it had fallen into disrepair is known locally as a haunted site called the Shipwright's Regret.[6] Some believe that this village was perhaps the greatest shipyard in High Rock.[7]