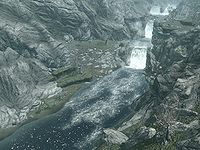 A map of Skyrim showing the Karth River

The Karth River is a large and important river that starts in the Reach and empties into the Sea of Ghosts near the port-city of Solitude. The Karth is well-known for its violent rapids and the dangerous terrain, such as jutted sharp stones and the crashing torrents on the river valley. But despite this, the Karth River provides a wealth of resource and life to the local people, whether they are Reachfolk or Nords of Karth. The people who live also understand that the Karth River can take as much as it gives. The river has been known to sweep people away and destroy everything from food stores to entire camps. The Karth demands respect above all else.[1]

The river is known to contain a rare and shimmering rock called the Bright River-Shale which is used by the Reachfolk in a ritual to commune with the Spirits of the Reach.[2] The river's water is sacred to many Reachfolk clans, who believe it possesses magical and cleansing properties.[3][4]

The Great Arch of Solitude

The Karth River starts in the alps of the Druadach Mountains, from the mountain called Bard's Leap Summit. That water comes down from a waterfall and into a man-made pool at Lost Valley Redoubt. From there, the water flows into twin aqueducts which empty into a small lake on the ground level, where the Karth River starts to flow down into the rest of the region.[5] Throughout the river is a variety of aquatic fauna, mostly the common type like the salmon and river betty, but the Reach in particular contains the valuable Lost Valley Tench and the Nchuand Cavetrout, but also rare fish like the Blackreach Pilgrim and the Fretfish.[6]

The Karth River moves slightly northwest along the main road, through various waterfalls and around jagged rocks. Eventually, the river starts to split at the southern base of Karthspire. One side goes directly north and swerves around the mountain, creating a steep valley called the Karth River Canyon, and meeting the river back on the northern base. The other side continues in the same direction, and even has several more water sources intersecting it. This water runs down from the Lover Stone to the northwest, Karthmad and Markarth to the west, and Reachwater Rock to the southwest, where the Reachwater River flows into it.[7]. The river diverges to the northeast instead and it streams along until it reaches the edge of the Reach and arrives on the historic territory of Karthald, forming a shallow area. The river drastically turns northwest right on the Hold's border, and moves across the hinterlands of Karthald and Haafingar.[8]

It empties into a small lake called the Karth River Confluence that has another water source coming from the west near Deep Folk Crossing.[8][7] The landmark known as Bruca's Leap is found on the north side of the lake, and it is sometimes used as a campsite by the Reachfolk.[9] At this point, you will find fish that are commonly found in northwest Skyrim, such as the Chillwind Pike, the Morthal Longfin, and the elusive Blue Muskie.[10] The river continues northeast, down rapid streams to calm waters next to Dragon Bridge. At this point, the river has reached sea level and it is now a long stretch of water to an estuary, the Mouths of the Karth, which the Hjaal River also empties into. The Karth River Forest is found on both sides of the waterway. The north side of the mouth is part of Haafingar, and it is mostly a steep cliff side with very little docking space, with the exception of Solitude. The south side of the mouth is part of Hjaalmarch and consists of the Drajkmyr marsh, flatland with cramped waterways that provide further access to the inland Hold. The Great Arch is a massive landmark that stretches over the Karth, and more less serves as a gateway between the Karth River and the Sea of Ghosts.[8]