The UESPWiki – Your source for The Elder Scrolls since 1995
< Bloodmoon: Places: Bodies of Water
Jump to: navigation, search 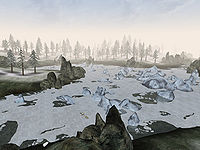 Lake Fjalding is a frozen lake in the Felsaad Coast region of Solstheim. 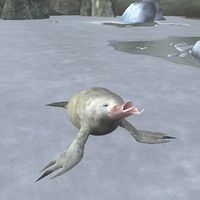 It is the largest lake in Solstheim, although it is covered by ice year-round and is often used as a mating ground for the horkers of the island. The lake is connected to the Iggnir River to the south and the Isild River to the north. Thirsk mead hall is on the eastern coast of the lake, near the Lair of the Udyrfrykte.

Both locations are part of The Mead Hall Massacre quest. During the Main Quest, a pillar of fire appears in the center of the lake, thus melting the ice and letting you access the Caves of Fjalding, home to an evil Draugr Lord and part of The Skaal Test of Strength quest.

There are also lost items beneath the surface, including an Old, Wet Note on a corpse with information on the Snow Prince's armor whereabouts (see the In Search of the Falmer quest) and the unique staff Haakon's Lucky Break.