The Kothringi (or Lustrous Folk[1]) are a silver-skinned[2] tribal people indigenous to Black Marsh who are believed to be descendants of the Nedes.[3] Once considered the only humans native to Tamriel, they are now known to have shared the continent with many other tribal groups.[4] The race was driven to extinction by the Knahaten Flu in the Second Era.[5] 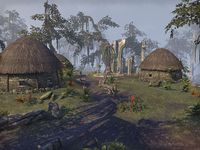 The Kothringi were thought to have been avid sailors, sailing as far as Hammerfell, notably spreading the Knahaten Flu of 2E 560 to Valenwood and nearby provinces by ship. Kothringi shipbuilding is said to be very idiosyncratic with one example having unusual paddle placement, shallow draft and a sail. Some vessels were capable of navigating both swamps and coastal waters due to this.[6]

The Kothringi were thought to be exterminated by the Flu,[5] although some of the infected fled on the Crimson Ship westward, away from Tamriel, never to be seen again.[7] However, legends tell of those who supposedly saw the ship and never lived to tell the tale.[8]

Despite the widespread belief of the race's extinction, several Kothringi survived the Flu through unnatural means. In 2E 561, the chief of Stillrise Village, a Kothringi settlement in Shadowfen, entered into a desperate pact with Clavicus Vile in order to survive the disease.[9] The Daedric Prince kept his end of the bargain, but did so by transforming the populace into immortal, undead skeletons.[9] The villagers maintained appearances through illusion magic, but their secret was discovered in 2E 582 when the Order of the Black Worm attempted to enslave the undead inhabitants.[9][10] The villagers successfully repelled the necromancers, but infighting broke out, and it is unknown if they chose to destroy the curse or continue living as skeletons.[11] In the nearby town of Zuuk, a lone Kothringi man named Drillk became immune to the Flu by absorbing the power of a keystone.[12][13] He became a person of interest to the Aldmeri Dominion and the Ebonheart Pact in 2E 582, when both sides sought to acquire the keystone.[14] An agent of the Ebonheart Pact rescued Drillk from the Dominion invaders, but the Kothringi revealed that taking the keystone's power would kill him.[13] It is unknown if the Pact soldier accepted his keystone or not.[15]

Circa 2E 582, a member of the University of Gwylim's Antiquarian Circle tracked down and discovered pieces of a magical Kothringi hunter's garment, putting it back together.[16]

Little detail is known about the Kothringi. They generally preferred to go naked, although a few wore clothes when outside their native land.[2] They appear to have worshipped a god named Z'en—a God of Toil—[17] as well as Dibella,[1] Mara, and Kynareth.[UOL 1]

Music was very important in Kothringi society. They were known to make instruments out of a variety of different materials, such as turning hollow logs into wamasu-sized drums, plucking sinew from cliffstriders to make low humming bow harps and most notable of all, their chimes known to be the Kothringi's most loved instruments. A Kothringi by the name of Baelah molded hundreds of chimes from tin and copper, hanging them from branches and striking them for their sounds. The Kothringi sometimes invited the Saxhleel for feasts and celebrations where they played their instruments for the Argonian people.[18][19] Circa 2E 582, the Bards College in Solitude came into possession of a Kothringi bugle created from the horn of a leviathan.[20] Around the same time, the Thieves Guild also stole a sacred Kothringi shovel, believed to be a blessed instrument of Z'en, from Stormhold.[21][22]

Some considered the Kothringi peerless crafters[23], despite their distaste for clothing. They might've been capable of difficult crafting feats such as weaving strands of metal into cord in order to create stronger nautical rope.[19] Kothringi spellcraft is considered unusual to the point that an experienced mage may miss its presence. Some Kothringi magic would possibly heighten the target's senses or reflexes[19].

Kothringi knights made up a large part of the imperial garrison of Gideon, and Empress Tavia, wife of Reman III, the last ruler of the Reman Dynasty, had a Kothringi knight named Zuuk with whom she conspired to assassinate her husband.[2] After Reman III was assassinated, "Lord" Zuuk returned to Shadowfen and founded a town which was eventually named after him.[24] The Kothringi buried their dead in cairns, often adorning these burial sites with glass beads. Some glass beads were also worn, serving as wearable instruments.[19] Some residents of Gideon claim that Kothringi spirits linger in the town.[25] Fortune hunters sometimes poked around Gideon, searching for lost Kothringi treasure.[26]