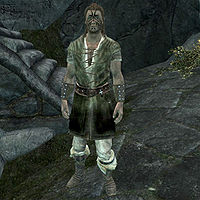 The Reachmen, also known as the Witchmen of High Rock, are a tribal race of humans who are native to the Reach in southwestern Skyrim[1][2] and the neighboring Western Reach in the east of High Rock.[3] They are believed to be closely related to the Bretons and some Reachmen believe that their people originally came from High Rock.[2] It's believed their ancestry also spreads across many of the known races of Tamriel.[3] At least some Reachmen are known to be descended from the Keptu clan of Nedes.[4] Although they are thought to share descent, Bretons do not consider themselves kin to the Reachmen, and the Reachmen do not see themselves as Bretons.

Their culture is tribal and they make little use of advanced technology; many clans utilize hides, bones and copper to make gear, while others use properly forged weapons and armor.[5][6] As they are shunned by most of Nord and Breton society, they typically inhabit makeshift fortresses built into caves and ruins throughout the Reach's battle-scarred landscape.[2][3] There are also some similarities in things worn by the nedic Keptu and the Reachmen, showing that a cultural exchange might have taken place.[7]

The Reachmen are also infamous for their advanced hedge-magic. Some Reachman mages are known to wield magic with which they can poison or corrupt nature.[8] They are also said to have learned to control beastfolk magic, a wild hedge-wizardry, which is often described as primitive.[9] Some Wyrd Covens, amongst them the Hagfeather Coven, the Rimerock Wyrd and the Markarth Sisters, are known to have close relations with the Reachmen and their magic.[10]

Many clans primarily worship Hircine, the most primal of the Daedric Princes. The top of their warrior ranks typically commune with Hircine so that they may ritualistically replace their hearts with poisoned briars, allowing them to become atrocities known as Briarhearts. Due to their reverence for Hircine, it is not uncommon to see lycanthropes within the Reachmen's ranks.[11] Some Reachmen clans are known to also dedicate ceremonies to Molag Bal, Malacath, Mehrunes Dagon, and Namira.[12][13] Their shamans venerate the hagraven "matrons", who in turn grant them knowledge of nature magic.[9]

In the Fourth Era, Markarth, the capital of the Reach, was the site of the great Temple of Dibella.[14] There is also a Shrine of Dibella present at Broken Tower Redoubt, which has been occupied by the Forsworn. It is unclear if the shrine is being worshiped at or if it has been desecrated.

Following the Markarth Incident, Reachmen rebels in Skyrim became known as the Forsworn. Hagravens led splinter groups encamped in various ruins and caves across the Reach.

The Reachmen have long held that they are the true owners of the Reach, and for centuries have only begrudgingly accepted the rule of the Nords and the Empire.[2]

Following the collapse of the First Empire of the Nords, the Western Reach was retaken by the Aldmeri, who slaughtered the majority of Nord colonists; as a result, the Nordic ancestry of the Reachmen is comparatively weak. The proximity of Reachmen settlements to Orcish villages meant that the Reachmen frequently traded goods and customs with their mountain neighbors, and it is partly from the Orcs that the Reachmen learned to use hedge-magic.[3] High King Olaf One-Eye later reconquered the Reach for Skyrim at some point during his reign between 1E 420 and 1E 452.[15]

During the Siege of Orsinium, Reachmen mercenaries under the command of "the Beast of the Reach" Mercedene of Clan Winterborn fought alongside Bretons and Redguards.[16]

The Legend of Red Eagle, an ancient tale from Reach folklore, suggests that during the time of the Alessian Empire, the Reach was ruled by ten kings, and that "though men were free, the people were scattered and warred amongst themselves." The legend also makes reference to the Reachmen's reverence of "the ancient and venerable Hagravens."

In 1E 2704, following the defeat of the Akaviri Invaders and the establishment of the Second Empire in 1E 2703, Emperor Reman focused on "the madmen of the Reach" and sliced the Reach in two pieces: the High Rock controlled Western Reach and Skyrim controlled Eastern Reach. With the growth of the Second Empire, not one decade passed when armies - often from Evermore or Solitude - weren't sent to suppress the Reachmen.[9]

During the 6th century of the Second Era, the Reachmen seem to have grown particularly powerful, eventually leading to the foundation of a Reachmen dynasty in Cyrodiil known as the Longhouse Emperors.

In 2E 541, the first Longhouse Emperor, Durcorach the Black Drake, invaded High Rock and swiftly captured Bangkorai, Evermore, and Hallin's Stand. Within days, his army was across the Bjoulsae and bearing down upon Wayrest. Durcorach did not have siege engines, so after fifty-seven days of besieging Wayrest, he left part of his army around the town's walls and marched off west into Glenumbra. Taken by surprise, the newly-independent city-state of Camlorn fell and was sacked. The Reachmen were defeated near Daggerfall's city gates after being charged from behind by Emeric's Heavy Dragoons, and Durcorach was killed by Emeric himself.[17]

Nevertheless, Durcorach's dynasty continued to rule in Cyrodiil until the reign of Leovic, Durcorach's grandson. In 2E 573, Leovic was the first Emperor to commission a Guide to Tamriel, labelled 'The Emperor's Guide to Tamriel'.[18] In 2E 577, Leovic was overthrown by his erstwhile supporter Varen Aquilarios, the Duke of Chorrol, after he legalized Daedra worship within the Empire. This marked the end of the dynasty of Longhouse Emperors.

After the Soulburst in 2E 579, several Reach clans allied themselves with the Worm Cult, and remained powerful enough to launch attacks on the Ebonheart Pact and Daggerfall Covenant's territories, even attacking as far afield as the Rift and Glenumbra.[19] Concurrently, one clan of Reachmen known as the Winterborn fought a lengthy war with the Orcs for control of Wrothgar after King Kurog gro-Bagrakh reestablished Orsinium in the region. The war finally ended when the last Winterborn warlord, Urfon Ice-Heart, was slain at Frostbreak Fortress.[19]

In the 9th century of the Second Era, some Reachmen allied with the Second Aldmeri Dominion. As a people, the Reachmen remained largely independent – although they frequently clashed with the Nords to the east – until the arrival of Tiber Septim at the end of the Second Era.[20] In 2E 852, King Cuhlecain's general successfully broke through the Reachmen's lines, forcing them to fortify themselves at Old Hrol'dan. The next day he approached the gates of the besieged city, protected by the winds created by a storm following his trail. Reports say that the ancient Nord art of thu'um was used to shout down the walls of Old Hrol'dan, after which the army of Colovian troops and Nord berserkers took the city with relative ease.[20] Markarth and the lands of the Reach were soon occupied by the Nords,[21] while Imperial propaganda branded the Reachmen as rebellious and lawless mongrels.[3] 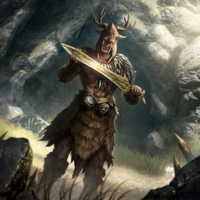 One of the Forsworn

In 4E 174, during the Great War, when the Empire did not have the resources available to maintain the outer provinces, a group of Reachmen led by Madanach (who would become their king) commenced what would later be known as the "Forsworn Uprising," gaining control of the Reach and creating an independent kingdom.[22] According to Arrianus Arius, they administered the kingdom relatively peacefully, with only a few of the harshest Nord landowners put to death.[22] After two years, their experiment with independence seemed largely successful, and the leaders of the Reachmen were beginning the process of seeking recognition from the Empire.[22] However, in 4E 176, desperate to retake the Reach, and with no Imperial Legions available due to the Great War, Hrolfdir enlisted the aid of a Nord militia led by Ulfric Stormcloak to retake the Reach by promising them free worship of Talos. In that year, the Nord militia successfully drove the Reachmen from the city of Markarth and reclaimed the Reach.[22] The survivors of the uprising fled into the wilds of the Reach and became known as the Forsworn.

Driven from Markarth, the Forsworn spread across the Reach, fortifying any defensible spot they could find. In the wilds, the Forsworn function as a terrorist organization; they are composed of a series of cells, usually led by hagraven "matrons" or undead Briarhearts, with their main tactics being caravan raids and attacks on outlying settlements.[23] The ongoing dispute caused consternation for those Reachmen who were not allied with the Forsworn. Native landowners were frequently under duress by both the Nords and the Forsworn, each party thinking the individual was working for the other.[24] Many Reachmen also lamented that so many of their friends and loved ones were fighting and dying in service of a long lost cause.[25]