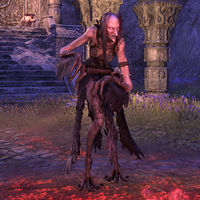 Caillaoife is a hagraven of the Dreadhorn Clan found in Bloodroot Forge. She initially summons Mathgamain to stop you, and then fights you herself at the entrance to the Sanguinary Veins.

Burning
Flame damage over time from fire-based attacks
Corrupted Grove
She shields herself with Nature's Preservation, bringing forth three trees from the ground and surrounding herself with an aura that does (?)
Scorch of Summer
Ranged travelling AoE that deals flame damage and causes weakness to fire, empowers Winter's Grasp
Wave of Earth
A traveling barrage of stones are flung in a direction, dealing damage to who it hits and knocking them back
Winter's Grasp
Ranged travelling AoE that deals frost damage and causes weakness to frost, empowers Scorch of Summer
Crow Swarm
Caillaoife disappears into a murder of crows and teleports to a different part of the grove
Summon Nirnblooded Animals
Cailloaife summons Nirnblooded Bears, Guars, and Senches to attack you at around 75%, 50%, and 25% of her health. Each wave increases in number. 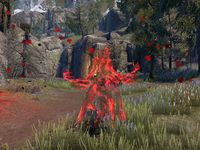 Initially she is encountered when her projection appears to summon Mathgamain, chanting: 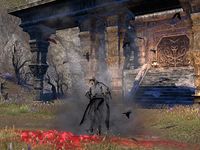 When you arrive at the entrance to the Forge, she will appear, annoyed at the trouble you have made.

Caillaoife: "Snatched the fat grubs from our hands. Yes, they have."
Caillaoife: "Never they mind, they're at the earth's hungry mouth. Yes, they are."

"Pluck their eyes and watch them flail!"
"Ripe and plump!"

"Hungry vines will knit your bones!!"
"Bare your throat for thirsty thorns!"
"Reap what they sow. Yes, they will."
"Bows they bend and bones they break, these branches of mine!"
"Hungry roots hear me crow! They do! They do!"

"Earth has fangs. Yes it does!"
"Rumble rubble, crash and tumble!"
"Mashed and mauled in rocky teeth!"
"Stoney talons gouge them deep!"