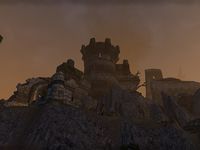 Frostbreak Fortress was built sometime during the reign of Savirien-Chorak, who ruled over the Second Empire between 2E 324 and 2E 430. Its purpose was to protect the region of Orsinium, which was recognized as a province by the Emperor-Potentate. However, Frostbreak Fortress was abandoned when the Orsinium territory was sacked[1] by the Bretons of Shornhelm.[2] It was reported that after the fortress was abandoned, it became haunted by its former Breton occupiers. Every so often, an Orc clan inhabited the ruins of Frostbreak Fortress, only to be driven out by the angry ghosts. One such clan, the Marag Clan and their leader, Chief Ghastzog refused to let the ghosts overwhelm them. The Chief had always favored an old Breton goblet called the Frostbreak Chalice, believing that every drink gave him powers of restoration. Thus a tradition was established as other chiefs upheld this belief by drinking from this cup.[3]

King Kurog led the siege against the Winterborn Clan at Frostbreak Fortress for a week.[4] Their Orc militia bombarded the fortress with their siege weapons, all the while, the Reachmen's flock of harpies swooped in and claimed various lives.[5] Deeper in the fort, the Winterborn were growing Briar Hearts to supply their warriors. King Kurog enlisted the help of an adventurer in their battle against the Winterborn. Both the warrior and the king traversed Frostbreak Fortress and infiltrated the inner sanctum. Eventually, they razed the harpy nests, sabotaged the briar heart production and encountered Urfon Ice-Heart, whom they engaged in combat. In the end, Urfon was killed, leaving the Winterborn scattered and without a leader as the Orcs claimed victory.[6][7]

Sometime around this time, the Morag Tong assassin, Naryu Virian had delved into Frostbreak Fortress during her mission to hunt down the Seven Secretives. The member, Rels Llothri had made their way through Frostbreak Fortress, nonchalantly killing the Reachmen that lived in the ruins. Once Virian realized that the trail was cold, she left for the ruins of Old Orsinium in Western Wrothgar.[8]