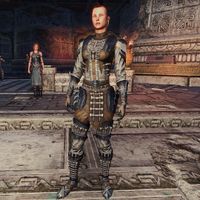 As you approach the front gate, you'll hear someone cursing the Thornroots.

Speak to her and she'll explain:

"You've come to the wrong place, outsider. Briar Rock belongs to the Thornroot clan. They kill anyone they catch here—or worse."
What do you mean, worse?
"The Thornroot Hagravens lash you to an altar, carve out your heart, and then use foul magic to make you into one of their Briarhearts.
At least, that's what they've been doing to my clan. I managed to escape, but all my kin are prisoners."
Why would they do that to your clan?
"The Thornroots want protectors. They welcomed my clan, then betrayed us. My kin are in cages, waiting to be made into living weapons.
I'll pay you well to teach the Thornroots a lesson. Free my clan, and burn their Briarheart Tree. Are you game?"
I'll free your people and destroy the Briarheart Tree.

After agreeing to help, she'll add:

"You'll find the cages where my people are being held in the ruins, up the hill to the right. Send anyone still alive back here … and keep an eye out for Chieftain Faorin. He's my father.
The Hagravens have something special planned for him."
Tell me about your clan.

"We're the Hillhunters. We roam the Reach, taking what the seasons give us. We're few in number, but no one knows the land as we do. We live by our wits and our woodcraft, keeping out of the quarrels of larger clans.
Until the Gray Host came along."
Why did the Thornroot clan turn on you?

"When the Gray Host came, Hagravens promised to protect the Thornroot clan by growing Briarhearts for them.
We came to parley about making camp here. The Hagravens just wanted bodies to plant seeds in."

"You must be new in the Reach. The Gray Host is a horde of vampires and werewolves and Icereach witches. They fell upon our land this season, and they kill any wilders they catch.
It's been getting harder and harder to stay out of their claws."
What does the Thornroot clan have to do with the Gray Host?
"When the Gray Host came, Hagravens promised to protect the Thornroot clan by growing Briarhearts for them.
We came to parley about making camp here. The Hagravens just wanted bodies to plant seeds in."

"Briarhearts are living weapons—warriors changed by dark magic to defend kith and kin.
Hagravens, now … they're witches of a sort. They can be helpful, but they demand a price. Whatever advice they give serves their own purposes in the end."
Changed by dark magic? What does that mean?
"The Briarheart change is a sacred ritual. A warrior endures terrible pain to become a Briarheart, but gians great strength and endurance. It's a willing sacrifice to defend the clan.
But the Thornroot Hagravens are using it to make an army."
Why would the Thornroot Clan ally with Hagravens?
"These are hard times. Maybe the Thornroots saw the Hagravens as their only hope. Whatever their reason, they let the Hagravens turn them against their neighbors.
That's what Hagravens do. They lead those who seek their help into dark deeds."

What is this place?

"Used to be a watchtower, I'm told, but it's been a ruin as long as anyone can remember. Draugr lurk in the tunnels under the hill, but the ruins above are defensible. Briar Rock's always been a refuge for clans in need of shelter."
Is this why your clan came here?
"Aye. The Gray Host threatens everyone. I wanted to take to the hills, but my father thought it best to find a place of strength. The Thornroots got here first, though.
We thought to share Briar Rock with them. The Hagravens had other plans."

"Thank you. Reachfolk are no strangers to feuds, but what the Thornroot clan did here was a mockery of our traditions. Strange that the punishment for their treachery came at the hands of an outlander."
Will your people be safe now?
"For the moment, aye. After we tend our wounded, I mean to talk to my father about finding our safety in the wilds. You're the reason we have that chance, and the Hillhunters will never forget it."

If you speak to her again at this point, she'll say:

"The Reach is better off without those Hagravens making free folk into Briarheart slaves. You've done a great service to all the clans by burning their Briarheart tree."
What will you do now?
"Time to put this place behind us. Until these troubles pass, we're best off on our own.
A Hillhunter pays her debts. Here you are, friend. As for Briar Rock, leave it to the dead."

"More of us survived than I hoped. Maybe next time my father will heed my counsel and keep away from dark places such as Briar Rock. Better to leave your foes chasing after your steps than to stand your ground with those you can't trust."
What's next for your clan?
"My father asked me the same question. If it's up to me … we're for the mountains now. It's a hard life, but it's safe. No enemy can catch us in the high vales."
Faorin respects your judgment. He'll listen to you.
"Aye, I know that now. I won't always be able to see the best course for the Hillhunters. But I believe that if I speak from my heart, I'll do right by the clan more often than not. Thank you, friend."

After completing The Despot of Markarth, you'll have an additional option:

Arana and her Wayward Guardians could use your help.
"Rebel's Retreat? That's a bold thought. Maybe we picked the wrong stronghold and the wrong allies. If there's no refuge anywhere in the Reach, might as well face our foes with spear in hand.
I'll speak with my father about it."

If you've completed her quest, you can find her and some of her clan in the Announcement Hall at the conclusion of Second Chances.

"Friend, you've done more for my people than most Reachmen know. You've changed my view of outlanders, that's for sure and certain."
How are you doing?
"I think the spirits are smiling on us once more. The Thornroots have given my clan no more trouble, and I'm thankful. Father thinks it's time I take up more of the leadership of the clan, so he's teaching me the ways. I hope I'm ready."