The UESPWiki – Your source for The Elder Scrolls since 1995
< Lore: People: R(Redirected from Lore:Faolan)
Jump to: navigation, search

Red Eagle, or Faolan in the language of the Reach, also known as King of the Reach[1], Lord of the Reach[2] and High Lord of the Reach[3] was an ancient king who, armed with a flaming sword, rallied his people and drove back the armies of Cyrodiil in the First Era.[4] Over time, accounts of Red Eagle have become distorted and embellished, but they seem to be based on truth: the Imperial chronicles of Empress Hestra mention a rebel leader who was eventually cornered and slain in battle around the year 1E 1030, at the cost of a full legion of men.[4][2] Curiously, stories of a similar king and his legendary blade appear in other ancient myths of the Reach.[2]

Rebel King of the Reachfolk[edit]

Red Eagle was born in the Sundered Hills and named for the screeching bird-call that greeted his birth, as well as the crimson blooms on the autumn hills. The augurs foresaw the boy's destiny as a warrior without peer who would unite the ten warring kingdoms of the Reach under his name. His people expanded and prospered until Hestra and her armies arrived; one by one, the kings of the Reach swore fealty or fell to her. When Red Eagle refused to yield, the scared elders cast him out.[2]

During this exile, Faolan came across a mysterious and powerful hagraven, also known as the Hag in early works [5], who offered him the power to free his people in exchange for his heart. Red Eagle had to clear his mind before he could embrace his destiny and filled his heart with the thing he loved the most - his people.[6] He accepted the offer and became the first Briarheart,[7] becoming a spirit of vengeance, pitiless, and beyond remorse and bringing an onslaught of violence and death to the occupying Imperials.[2]

In the years that followed, the exiled Red Eagle became known as the untamed spirit of the Reach, unbowed, unbroken, stained by the blood of his foes. He wielded the powerful flaming blade called Red Eagle's Fury.[6][8] He gathered Reachmen who clung to the old ways and yearned for freedom to forge a new nation. The rebels grew in strength and numbers, and none could stand against them; after two years, they had all but succeeded in driving the foreigners out of the Reach.[2]

At some point in his life after he accepted his fate as a Briarheart he was visited by the Yokudan sword-saint Rada al-Saran who lost his ability to manifest his Shehai. He traveled to the Reach due to the tales of a legendary warrior wielding flaming blade. Ultimately Faolan agreed to help the Ansei and taught him how to reclaim his Shehai in the Sacred Cave in Red Eagle Redoubt by focusing on what he loved most. For Faolan it was his people, for Rada - the Gray Host.[6] The knowledge bestowed by Faolan allowed Rada to "reforge his Shehai in bitter blood". This proces permanently turned Rada's spirit sword bloody red.[9]

"Faolan, the Red Eagle, last drew his blade at sunset. Naked was his breast and arm and head. The light of his eyes dimmed, the hagraven's due.
But the blade burned bright, as did the fury left to him. And he faced the legions that bid him kneel.
No ring or steel could turn his blade. Men were hewn through as reeds in wind. Red Eagle's flesh wept blood, blackened and thick with sorcery.
Blade and arrow found him, time and again. Faolan did not fight to win. His aim was punishment.
The sun rose over the field of dead. Red Eagle stood, though no life was left to him.
The tomb was opened and the eagle flew no longer."
—Reach vateshran story about Faolan.[10]

Faolan and his followers engaged in an extended guerrilla campaign which, while tactically successful, was not enough to stem the seemingly endless waves of Imperial reinforcements. Hestra's generals returned with an even bigger invasion force and laid siege to Red Eagle's stronghold until he himself came forth for battle, alone and naked, and purportedly killed a thousand soldiers before they brought him down.[2] Red Eagle was taken to a prepared tomb, and with his remaining strength, he presented his sword to his people, and swore an oath: Fight on, and when at last the Reach is free, his blade should be returned, that he might rise and lead them again.[2]

Mortally wounded[2] or dead[5] Red Eagle was carried by the weeping cortege up the crag at dawn. Reachfolk followed with pots of resin and ash in order to prepare his body for burial. Ashes were scattered to lay upon his body which was exposed to the chiefs of numerous clans. The ceremony was interrupted by Hag who took the briarheart from Faolan's chest despite the protests of the attendants. Once she left the ceremony continued and he was carried into the deep cave in the heart of the mountain which was a place of a prepared tomb and then he was "laid bare for the last time in sleepless rest" in the tomb. The stone was sealed, wax poured and flints shattered.[5] After the burial numerous traps were set to dissuade intruders and grave robbers. The resting place seemed unadorned at first but in the deeper parts of the tomb the rippled rock walls were replaced by ornate man made walls of hewn stone and covered with chiseled murals depicting scenes of Red Eagle's final battle. Despite the rich ornamentation of the room and later parts of the corridor that led to it the sarcophagus placed on dais in the central part of the chamber was simple and unadorned. Faolan was buried with his legendary weapon - Red Eagle's Bane, which was put on a pedestal near to his body.[1] 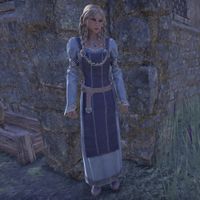 Bjora, the only known direct descendant of Faolan

At some point before 2E 582 Red Eagle's tomb was visited by a Breton scholar of the Red Eagle's legacy Dettethor Pantenne. As soon as he reached the entrance to the tomb he felt drawn by the the flittering whispers and distant horns, calling him forth. He eventually reached the burial chamber and gazed in awe at the legendary sword of the Faolan. Attracted by it Pantenne took the blade's handle to his hands and then he heard voice of Faolan himself. Red Eagle's convinced him with a visions and promises of power to place the sword in the sarcophagus alongside his body. After a while the Reachfolk king awakened from his slumber in a skeletal form. Scholar's mind was filled with terrific visions of destruction. In a rush of adrenaline Dettethor managed to steal the blade from the freshly awakened Faolan and ran away towards the exit of the tomb. At some point of his escape he lost the blade and triggered mechanism that sealed the tomb.[1]

By the Second Era, Red Eagle's last known descendant was Bjora, of Karth. Taken as a baby by the Nords of Karth during a raid on a Reachman camp, Bjora was raised as a Nord, in ignorance of her true heritage, and would go on to help them establish the settlement of Karthwatch.[11] In 2E 582, Bjora was kidnapped by the Icereach Coven, who believed she was prophesied to lead as their Queen. After destroying Karthwatch in a Harrowstorm, they brought her outside Red Eagle's Redoubt and began using magic to implant memories in her, including a vision of Red Eagle handing her a crown of briars while a frightening, fanged man declared that she would lead his armies.[12] The ritual was ultimately interrupted by her childhood friend, Hafskjar, assisted by the Vestige.[13]

He was remembered not only as a great warrior and a hero but also as a great teacher by the Vateshrans of the Reach.[14] Although it is unknown if Red Eagle's Fury was a manisfestation of Shehai or not his teachings allowed another Redguad swordmaster, Sai Sahan to achieve his lifelong ambition of summoning his Spirit Sword by putting aside his devotion to duty and focusing on what he loved—in his case, his companion Lyris Titanborn.[6]

By the Fourth Era, a descendant offshoot of the Reachmen, the Forsworn, drew several parallels to the struggles of Red Eagle and his oppression under an occupying force. As such, many of them extolled his teachings and practices, and looked up to him as their savior. They planned to resurrect him through the ancient ritual.[3] In 4E 201, the Last Dragonborn plundered Red Eagle's tomb and killed the undead being he had become, claiming his mighty sword.[15] 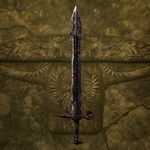 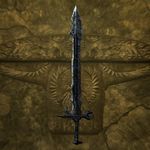 Red Eagle's Fury, also known as Red Eagle's Bane was the legendary sword wielded by Faolan during his defense of the Reach against the invasion of the Imperial forces of Empress Hestra which started in 1E 1028 until his last stand against Empress Hestra's forces in 1E 1030.

Red Eagle's Fury was described as magnificent and powerful flaming blade. According the the tales of the Vateshrans, when it was wielded by Faolan "no ring or steel could turn his blade". The sword was likened to Shehai of the Ansei, any direct connection between them is unclear, however in rare circumstances Shehai have been known to persist after the bearers death.

According to the legends when the Reach is free, his blade should be returned to him that he might rise and lead them again. The legend turned out to be true when Faolan's corpse was presented with the Red Eagle's Fury and the ancient king rose from his grave.