Blackreach, also called Fal'Zhardum Din ("Blackest Kingdom Reaches" in Dwemeris),[1] is an immense cavern located deep beneath the Pale, Winterhold, Hjaalmarch, Haafingar, the Reach, and possibly extending across all Nine Holds within Skyrim.[2] Many giant glowing mushrooms grow throughout the cavern, providing natural light. The cavern is rich in minerals, including rare geode veins, and a subterranean river flows through it. Originally settled by the first vampire clans and later the Dwemer, Blackreach once served as a highway connecting several of the Dwemeri cities found within Skyrim. Various inhabitants can be found within Blackreach, these include Dwemer Animunculi, Falmer, Vampires, Giants, Frost Trolls, and Wispmothers.[3]

Sometime between the Merethic Era[4] and the second century of the First Era, the first vampire clans would emerge and would establish their own kingdoms within Blackreach.[5][6] One of these clans was the Nighthollow, who discovered an artifact known as the Dark Heart. They become reliant on its Void energy for sustenance, and consequently became unable to gain nourishment through blood.[6] They ruled the Reach above from the depths of Blackreach, and were dubbed the Night Lords by the ancestors of modern Reachfolk.[7] 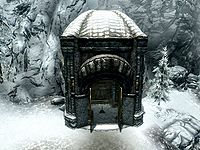 When the Dwemer settled in Blackreach, they built Great Lifts to provide quick transport to the surface. Alftand, Mzinchaleft and Raldbthar were all connected thusly to Blackreach. Irkngthand may also have contained an entrance, but it was no longer accessible as of 4E 201.[1] The Dwemer constructed roads and buildings, culminating in the Silent City in the center of Blackreach. Dwarven Centurions were installed to guard the cavern's roads. The Dwemer farmed mushrooms in the damp environment. The Tower of Mzark, located in Blackreach, contained a device used to transfer the knowledge of an Elder Scroll onto a lexicon. Blackreach also acted as the lair of the dragon Vulthuryol.[8]

Sometime after the death of King Harald in 1E 221, the Dwemer city-states of Arkngthamz, Bthar-Zel, Mzulft, and Raldbthar,[9] (and possibly Nchuand-Zel)[10] formed an alliance to oversee the extraction, processing, and study of the arcane mineral known as Aetherium.[9][10] This alliance eventually discovered the Dark Heart, and stole it from the Nighthollow Clan.[11][6] They created various apparatuses to study and control the heart's power. They opted to create the Library of Arkthzand, A place to share knowledge amongst the clans,[10] and built an orrery within it to chart the Void using cosmic forces (aetheric, kinetic, and tonal), using the Dark Heart to chart the Void.[6] Eventually internal disputes would occur over Aetherium, and the precious material would lend its name to the Aetherium Wars, which led to the collapse of Skyrim's Dwarven city-states,[10][9] and resulted in the Library of Arkthzand's abandonment.[10] Although the Dark Heart lay dormant, empty pockets known as void portals would continue to form around the library.[12][13]

In the early First Era, the Dwemer took in the Snow Elves that were seeking refuge from the invading Nords after the Snow Prince was defeated. The Dwemer fed the Snow Elves fungi that grew in the caverns which rendered the Snow Elves blind. The Dwemer would later betray the Snow Elves by using them as slaves. The Snow Elves rebelled, overthrowing their Dwarven masters, and fleeing to the darkest corners of Blackreach. The cavern became the stage for the War of the Crag, a war fought between the Dwemer and Falmer for many decades. When the Dwemer disappeared from Tamriel in 1E 700, the devolved Falmer were free to spread throughout Blackreach.[14] Over the centuries, the Falmer came to inhabit the abandoned halls of their former masters. By taming the Chaurus, they were able to use its chitin to create primitive camps, many of which were set up in Blackreach.[8]

Sometime in the First Era, Rada al-Saran would come across the Dark Heart beneath the Reach.[15] After the defeat of the Gray Host at the hands of Saint Pelin, Rada made a deal with Lady Belain the Matriarch of the Nighthollow Clan, who was seeking to restore the Dark Heart using the Prophecy of the Dark Heart and revitalize her clan. Rada ended up asking her to wait to enact the Prophecy as he first needed, to find the means of restoring the Gray Host, and finding the means to access the Arkthzand Orrery.[16]

The cavern remained largely unknown to the surface-dwelling people of Tamriel outside of legends[2] and scholarly texts. During the Second Era, Crimson Nirnroot from Blackreach was prized for its rarity and its use in alchemy.[17] A Dominion scout named Vole fell down a shaft and ended up in Blackreach during the Alliance War. He managed to find a chaurus and ate it, but unknowingly consumed a soul gem in the process and gained an innate ability to tinker with machinery, fixing one of the great lifts and leaving the ruins.[18] The Icereach Coven would later use Blackreach to experiment on unwilling test subjects by luring them with fliers to the Grinning Horker Inn, though their plot was thwarted by agents of King Jorunn.[19]

The existence of Blackreach was somewhat known to some residents of Western Skyrim by the year 2E 582, the Bitterblade Mining Consortium had set up a small mining settlement known as Dusktown within the depths of Blackreach.[20] An area near the Dusktown Caverns, known as Dark Moon Grotto was settled by werewolf refugees who had escaped the confines of Greymoor Keep.[21] Greymoor Keep at the time, was controlled by the Gray Host, the vampire Essenia who originally controlled Greymoor Keep willingly relinquished her rule of Greymoor Keep to Rada al-Saran, allowing her to focus more on research and experimentations. One of these experiments she conducted involved mixing together various vampiric bloodlines as part of the process of creating her own bloodknights.[22][23] Greymoor Keep would be converted into a massive Witchpike by the Gray Host as part of Rada's efforts of unleashing a massive Harrowstorm on the city of Solitude.[24]

After being discovered as an ally of Rada by The Vestige and House Ravenwatch, Lady Belain hurried to rally the Ghostsong Clan to enact the Prophecy of the Dark Heart. Those who deserted the clan were quickly killed, while the willing were sacrificed to the Dark Heart.[25] House Ravenwatch and the Vestige would later assault Nighthollow Keep under Blackreach, and discover the Heart deep within the keep's depths, as well as the ongoing ritual to fully reawaken it. It was too late, and the Heart was reawakened, and resurrecting the Nighthollow clan from its ashes.[26] Lady Belain later unsealed the doors of Nchuand-Zel after an assault on Markarth, catching those at Understone Keep off guard and almost killing Ard Caddach. The Vestige followed Arana into the Nchuand-Zel, and recovered the keystone within the ruin's depths to gain access to the Orrery of Arkthzand, which al-Saran required to harvest the Heart's power to its full potential. There, Lady Belain teleported the intruder's to the Dark Heart's chambers, and bathed in its power. Despite this, Namira intervened through Arana, and gave her the strength to press on despite her wounds. Together, the duo slew Belain, striking another blow against Rada, though Arana succumbed to her wounds after the battle.[27]

The Dark Heart remained a lingering threat, as it was awakened but not at full capacity, and Arkthzand's orrery remained charged with Void energy. With the heart's newfound power quickly draining, time was of the essence for Rada, and he conducted a meeting with some of the other leaders of the Gray Host north of Markarth, near the Druadach Mountains. Although Belain was gone, she managed to buy time for Rada to tie the heart's energy to the Gray Host, further laying down the foundations for his plans.[28] After intercepting a letter at a Gray Host meeting place, the Vestige learned of Rada's intent. The letter was written as a final act of desperation, and written on it was Rada's plea for Verandis to rejoin his Gray Host, and House Ravenwatch would come to realize Rada's plan in full. Rada had opened a gateway into his sanctuary realm of Grayhaven, using the Orrery as a map, and the Dark Heart as a power source and gateway for this endeavor. After Rada's defeat at the hands of the Vestige within Grayhaven, Verandis remained behind in Blackreach to safeguard the Dark Heart and to make sure it could never be used again.[28][29]

In 4E 58, the master alchemist Sinderion arrived in Blackreach to study the Crimson Nirnroot, having been directed there by an explorer named Obeth Arnesian. The Crimson Nirnroot was a variant of the common Nirnroot found exclusively in Blackreach, where it grows symbiotically with the cavern's mushrooms.[30] Sinderion set up a field laboratory in one of the abandoned Dwemer houses, where he was eventually killed by one of the still-functional Dwemer animunculi.[31] In 4E 201, the scholar Septimus Signus sent the Last Dragonborn to Blackreach on a quest to retrieve the Dwemer's Elder Scroll.[32] The Dragonborn also uncovered Sinderion's remains, and by collecting several samples of Crimson Nirnroot, was able to continue his research.[33] Through use of the Thu'um, the Dragonborn awoke Vulthuryol. The two did battle, and the Dragonborn absorbed the dragon's soul.[34]