The UESPWiki – Your source for The Elder Scrolls since 1995
< Elder Scrolls Online: Quests: The Reach / Story Quests
Jump to: navigation, search
Arana believes that her former clan knows about dark Reach magic and old prophecies. If I can find the Ghostsong clan and convince the witches to share their lore, I may learn what Lady Belain plans for the Reach.

Lady Belain's interest in Reach-witch prophecies is troubling to Arana. Fortunately, she knows someone who could tell you more about the prophecy Lady Belain spoke of, someone who could possibly discern what she wants to do with it. Arana wants you to meet her sister, Nathari, a witch for the Ghostsong Clan. She won't be willing to meet with an outsider unprompted, so Arana is going to introduce you to Bradan, a werewolf who has the Ghostsong Clan's respect.

Your first task is to meet Arana and Bradan at Hroldan Ring, which lies over the hills southeast of Rebel's Retreat. You can approach from the south and cross the bridge to get to the ring, or go through the valley containing the Harrowed Haunt Ritual Site. However you get there, you'll find Arana and Bradan

Arana introduces you as Bradan tells her the clan was just heading to Lost Valley Redoubt. Speak with Bradan and become acquainted with him. He offers to vouch for you, and mentions that Nathari promised her clan a great revelation. Bradan plans on following them there. Travel to Lost Valley Redoubt, which is east and south of Hroldan Ring. Cross the bridge leading southeast from the ring and follow the road along the Karth River, passing by the Lost Valley Wayshrine. Follow the road until it splits, take the path south across the river, then continue east.

Something ominous is afoot

You'll find Arana along the road beneath the great looming structure, examining the corpse of a Gray Host scout who has been clawed to pieces. She recognizes it as Bradan's handiwork, and is perturbed by the fact that the Gray Host has come here. Speak with her. She has reason to believe Nathari has lead her clan to the caves beneath the barrow that her ancestors performed rituals in. The entrance to the barrow was hidden by Arana's mother when she was young, and no one has used the caves since before she was born. Nathari has always been interested in the clan's old stories, and it seems plausible that she would take them there to deliver her revelation.

Begin climbing the stone stairs up the mountain. Arana will start following you. You'll start your ascent by simply following the path, slaying Gray Host abominations as you climb. The Gray Host appears to be guarding the ruin. When the path splits between a dirt path and a stone bridge, take the dirt road east. There's a Gray Host command camp up ahead, which Arana suggests you investigate. Pentarch Draljura is commanding a Gray Host Werewolf. A letter addressed to the pentarch is sat upon a nearby wooden bench; you should read it. The letter reveals that Lady Belain has been grooming Nathari to perform a ritual required by the prophecy she and Rada al-Saran were talking about. The ritual is supposed to awaken something called the Dark Heart. Speak with Arana about this troubling news.

According to the prophecy, death awakens the Dark Heart; Lady Belain probably has something terrible in store for the Reach. The prophecy says that an ancient darkness sleeps beneath the Reach, and it will awaken at the end of days, devouring all and drowning the world in shadow. Only Namira's faithful will be spared. You need to stop Nathari before she falls prey to Lady Belain's plot. Continue your climb by heading up the stairs leading south, and following the path west. The entrance to the barrow is on a patch of land in the middle of the river just beneath the valley's falls, splitting the river in two. A great Dragon Cult structure looms over the concealed entrance, which glows blue. Arana unseals the entrance, allowing you to enter.

The barrow is alive with Gray Host activity. Head through the hallway to the east. When you arrive in the next room, you'll find evidence of ritual sacrifice. Lady Belain wants Nathari to perform such an act to awaken the Dark Heart. Nathari intends on sacrificing many of her clansmen; that's why she brought them here. An altar with a dead Ghostsong hunter upon it lies to the west. Examine the corpse, then continue down the hall to the south in your search for Nathari. 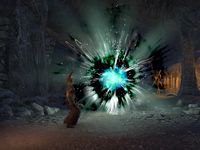 The Ghostsong witches are reaching into the Void

The Chamber of the Dead lies ahead. Nathari is here, sitting in the center of a circle of corpses and candles. Speak with her.

"I should have expected Arana to take up with outsiders. She always rejected the old ways.
This is no place for one who doesn't hear the spirits of the Reach. You're not worthy to walk these sacred halls."
Worthy? You sacrificed your own people.
"And every one of them gave up their life willingly. They gladly died to awaken the Dark Heart from its slumber! Arana may deny it, but this is the day Namira has been preparing us for.
We give our souls to the dark in return for eternal life!"
And none of your people refused to lay down and die for you?.
"You sound like Bradan. True believers see the honor in this sacrifice, but not everyone can overcome the fear that whispers in their ears. The flesh quails even when the spirit is strong.
No matter. We help them complete their journey."
In other words, you kill them, whether they agree to die or not.
"Why does this matter to you, outsider? The Ghostsong hunters—the true hunters—gather below, ready to give their lives for the Spirit Queen. Bradan will too, when his time comes.
I shall complete the ritual and awaken the Dark Heart!"
Lady Belain is using you. She doesn't care about your clan.

After your conversation, she addresses Arana, telling her that the ritual will be finished no matter what. She then teleports away. You need to stop her. Descend further into the barrow. Ghostsong Clansmen loyal to Nathari await within. Search the barrow and see if you can find any unwilling captives. You'll find them in the hall to the east, the west, and a little ways south and east. In the latter of those locations, you'll come across the corpse of Senan, one of Arana's old friends. He was literate, and wrote something down in his dying moments. The note says that many clansmen were brought down to the Dark Descent to be sacrificed. Arana knows the place. It's a cave with a massive pit that is said to divide the land of the living from the dead. Head further into the barrow and enter the Descent.

You'll find yourself at the top of a stone staircase, and will walk down a long hallway, crossing a bridge over a ravine. There are two enemies in this stretch of hallway. At the end of the hall is a door leading to the Chamber of the Watchers, where you'll find Nathari. She taunts you before teleporting away, leaving a Ghostsong Witch and Ritualist to fight you. Once the two witches are dead, a Shade and a Void Rot are summoned. After you destroy these creatures, a Shade Colossus appears. Once the behemoth has been defeated, Arana mentions that the rituals Nathari is carrying out down here strengthen the clan's witches with every passing moment. You need to hurry. Head through the door into the Ritual Cavern and pursue Nathari.

Traverse the cavern. You'll find Nathari at the pit, which is glowing green. Several Ghostsong Clansmen are standing at the edge of the pit. Nathari orders them to give their lives to the Dark Heart, and they oblige by stepping off the edge, into the endless darkness. Bradan and several of Arana's people are bound nearby. Nathari teleports down from her perch to face you; you'll need to kill her.

Once Nathari is dead, Arana will begin untying the bound survivors. Speak with Bradan. He mourns the loss of Nathari as a friend and clanmate, and vows to make Lady Belain regret manipulating the Ghostsong Clan. The rebels now have Bradan and his hunters on their side. With this out of the way, it's time to return to Rebel's Retreat. A door to the west will bring you back outside. You can take the Lost Valley Wayshrine back to Rebel's Retreat, or you can go on foot. Either way, you'll need to speak with Arana when you arrive to receive your reward for stopping Nathari's ritual.