The UESPWiki – Your source for The Elder Scrolls since 1995
< Lore: Minerals: Crystals
Jump to: navigation, search

Soul Gems
"Before the Psijics of Artaeum, it is said, [Raven Direnni] created the art of enchantment, learning how to bind a soul into a gem and use that to ensorcel all manners of weaponry."
—De Rerum Dirennis

Soul Gems are morpholiths used in the process of binding souls using magic. These gems are used to enchant and charge magical items, animate undead or artificial constructs, or cast powerful destructive spells.[1] For this purpose, creatures' souls are usually trapped at the moment of death.[2] Soul gems can be mined from geode veins, one of the locations to contain geode veins is Blackreach.[3] The origin of Soul Gems can be traced back to Harvester of Souls himself, Molag Bal, who used a portion of his power in their creation.[UOL 1] Indeed, Black Soul Gems can now be found within the depths of his realm of Coldharbour,[4] where he fine-tunes them to increase their efficiency.[5] 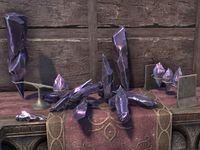 Sometime after the genesis of the Clockwork City, Sotha Sil was dissatisfied with the potency of regular Soul Gems as power sources for his ambitious designs, and sought to improve upon them. One such iteration was the Animus geode, but their uses were still limited.[6] In the case of his mechanical constructs, the Factotums, he went eventually came up with the animo core—a brass vessel that utilized a soul gem in some manner.[7] Later, Sotha Sil would seek to uncover the secrets to everlasting life, and was the first to reverse engineer soul gems into Black Soul Gems.[8] He used the aging Temple Saints, Felms Olms, and Llothis as test subjects, transferring their souls into Black Soul Gems, with Factotum bodies as vessel. Like others whose have transferred their souls into Factotum vessels, they went insane, causing the study of Black Soul Gems to be banned by the Clockwork Apostles.[9]

Outside the isolated confines of the Clockwork City, Sotha Sil's findings were unknown. Mannimarco and his underlings were expelled from Artaeum by the Psijic Order in the early Second Era for delving into the art of Necromancy. One of Mannimarco's followers, Vastarie, allied with him over the common goal of seeking "to trap souls as one might capture lesser Daedra". They believed their objective was to be found within Coldharbour, which Vastarie agreed to venture into herself; She would be the first to bring Black Soul Gems from Coldharbour to Tamriel. They were perfect for their ambitions, as unlike other soul gems, they were "small, capable of containing even the most willful of souls, and apparently indestructible." Vastarie attempted to replicate the gems, but Mannimarco's aspirations would come to conflict with her own. Mannimarco desired to use them to gain power, while Vastarie desired to build upon them for ethical reasons. Fearing Mannimarco, Vastarie fled with her husband away from his clutches, and continued to improve on her creation, eventually coming up with a perfected Sigil Geode. She intended to use it to consult with the souls within for knowledge that could be recorded, however, when she contacted Vanus Galerion of the Mages Guild to report her findings, it disgusted him.[4] 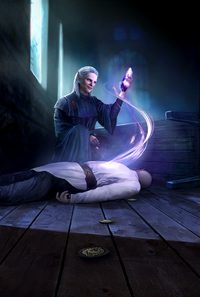 Soul Trapping is known to date back to at least the First Era, where techniques to bind a soul to an unhatched egg were practiced in Black Marsh before they were banned because the techniques were prone to error. After the Mages Guild was founded, the ban was lifted and the practice of soul trapping resumed.[10] Soul-trapping spells and soul gems were standardized in the early centuries of the Mages Guild.[11] Soul gems come in many sizes, corresponding to the size of the soul that the gem can trap; the standard sizes are "minor", "petty", "lesser", "common", "greater", "grand" and "divine". Souls are also categorized into "black" souls, the souls of sapient races, and "white" souls, the souls of lesser creatures, although the distinction is arbitrary. The division was implemented in the early days of the Mages Guild at the behest of Vanus Galerion, in an effort to limit the practice of soul trapping.[11] It must be noted that blessings of Arkay and various ritual rites also seem to protect unwilling souls that would be classified as "black" from being trapped or manipulated, though it is not clear if this is the case in general or only with the souls of the dead who had gone through proper burial rites. [12]

By the Third Era, only white souls were being captured by the standard spells and gems of the Guild (as well as Azura's Star), and this practice was so thoroughly ingrained that most mages continued to avoid trapping black souls well after the Guild was disbanded.[13][3] Black soul gems could bypass this limitation and trap even the most willful of souls, though they were hard to acquire and required travel to various Daedric Planes. [4] Necromancers, led by the Order of the Black Worm, pioneered an easier way to create a black soul gem using the rituals of the Revenant. Although capable of storing black souls, the gems were dangerous to handle as small bits of the caster's soul could leak into the gem.[14]

When a mortal soul is used in the enchantment process through the use of a black soul gem, it is supposedly sent to the Soul Cairn for all eternity. A transaction between the Ideal Masters and willing necromancers can occur, in which case one can offer souls in exchange for power or armies of undead.[15] In at least a few cases, trapped souls have retained consciousness within a soul gem itself.[1][3][16] Soul gems can seemingly capture essences other than an Anuic animus that a mortal possess, such as vestiges and other types of animius. The Amulet of Kings is said to be one of most powerful soul gems ever created—this soul gem is capable of capturing the essence of a Daedric Prince. In 2E 582, Mannimarco plotted to trap Molag Bal's essence with the Amulet of Kings as part of his scheme to become a god, but he was defeated before he could perform the ritual.[1][17]