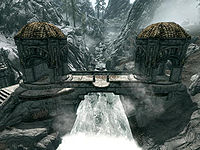 Bthar-Zel (also spelled B'thar-zel,[1] meaning Allied City)[2] is a Dwarven ruin situated along the Druadach Mountains of the Reach, within the province of Skyrim and north of Markarth and Bthardamz. Its bridge lies atop a waterfall that feeds into the Karth River. In its prime, Bthar-Zel was among the cities involved in the refinement of Aetherium. It fell into ruin following the disappearance of the Dwemer, becoming known as Deep Folk Crossing.[3]

The settlement of Bthar-Zel was built by the Dwarves around the First Era.[2] It is unknown how large it originally was, but its name suggests it was once an entire city, albeit a smaller site than nearby Bthardamz. When the Kragen Clan discovered the material known as Aetherium, a bright blue crystal found only in Skyrim, Bthar-Zel allied with the cities of Arkngthamz, Mzulft, and Raldbthar, creating a loose alliance of Dwarven clans to study the mineral. They eventually created the Aetherium Forge at Bthalft in the wilds of the Rift. However, each city sought ownership of the Forge, and as time went on, the four cities waged war with each other in an event known as the Aetherium Wars, tearing the land apart. With the intervention of King Gellir, the conflict was over, and the Dwarves of Arkngthamz were forced out of their city. The Dwemer were able to return to their homes, but like the rest of their race, they disappeared, leaving behind whatever Aetherium they acquired.[4][5] Bthar-Zel remained abandoned since, becoming known as Deep Folk Crossing.[2][3]

By the Fourth Era, all that remained of Bthar-Zel visible to the surface was the bridge built over the waterfall.[3] Sometime during the Skyrim Civil War in 4E 201, two historians of the Dwemer, Katria and Taron Dreth studied the ruins of Arkngthamz for roughly twenty years, with Katria discovering a map of Dwemer kingdoms that named the site of Deep Folk Crossing as Bthar-Zel.[2] Two young Nord children named Sond and Bottar discovered the site, looting a few Dwemer materials, and offered to mark its location on a map for a small fee.[6] The Last Dragonborn traveled to this location and discovered a shard of the Aetherium Crest locked inside a Dwemer Convector on a stone plinth is an Aetherium Shard.[7]