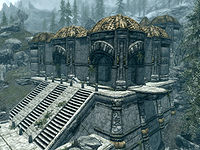 Bthardamz is a Dwemer ruin found in the Reach, located east of Druadach Pass. It was built in the Hoagen Kultorra style like many of the other strongholds of the Northern clans, featuring an Arcanex, Workshop, Upper and Lower Districts, and a Deep Venue layout featuring roads wide enough for ten large men to walk shoulder-meets-shoulder along it.[1] The site is notable for containing an unnatural green toxin, which was first used for biological warfare by the Reachmen against the Imperial Legion in the early Fourth Era. A similar green toxin remained within the ruins for years to come, and was used in the rituals of the Peryite worshippers that had moved in by 4E 201.

Circa 2E 582, The Shrine of the Hunt-Father was erected within the city of Markarth, and the Symbols of the Five Aspects were requested to be placed in the shrine for safety. Bthardamz was one of the two rumored locations for the Wand of Bone, one of the symbols, which an adventurer aided in its recovery, discovering that the courier sent to retrieve it perished.[2] Later that year, the Wayward Guardians sent the adventurer to recover scraps from Bthardamz. Despite the Reachfolk's superstitions beliefs of Dwarfcraft being unnatural, their fight against the threat of the Gray Host justified the use of it against unnatural forces. Furthermore, Hircine teaches them to be hunters and not prey, so necessity is a valid excuse.[3] 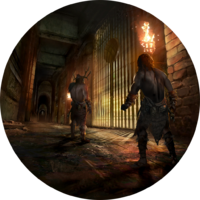 The ruins were visited sometime in the Fourth Era by Talym Rend, a former spy to the Empire. He had made a bargain with the daedric prince Sheogorath to have his guilt removed regarding the death of his son. The prince requested that three people be turned mad. Talym traveled to Skyrim for his last victim. The target was his friend and former employer Porcia Loran, and Sheogorath intentionally had left her for last. Talym begged Sheogorath to keep her out of this ordeal, but he would not budge. Talym had already come this far and would ultimately give into the Prince's demands. To make matters worse, Sheogorath altered the deal and would give Talym only three days to do the job.[4]

Porcia was working on a mission to intercept Reachman intelligence. Talym would play on Porcia's weakness, her job being her life's work. He intercepted a Reachman courier in nearby Druadach Pass, and learned that they had a toxin they planned to transport using Dwemer animunculi. The toxins were created with a mix of deathbell, Falmer ear, nirnroot, and red mountain flower. Cyriel would depart ways with Talym after getting in an argument with him, as she would not be part of the coming slaughter.[5] Talym then infiltrated the nearby Dwemer ruins of Bthardamz, where the Reachmen were stationed, and planted false intelligence about an antidote to the their toxins.[6] Porcia had arrived in the scene and was captured by the Reachmen, who had been alerted to Talym's presence. Talym would fight through the Reachmen, releasing her, and would convince Porcia that he had come to her aid.[7] Porcia had read the false intelligence, and they journeyed to a Grove of Mara where she hoped to obtain the ingredients for the toxin's antidote. The priestesses of Mara refused to turn over the flowers needed for the antidote, leading Porcia and Talym to ponder of the circumstances. Porcia came to the conclusion that the lives of her men were valuable, and the Priestesses were going to be killed by the Reachmen anyway, so decided to slaughter them all and retrieve the flowers.[8] Porcia's alchemists mixed the flowers into the antidote, anticipating that the Reachmen would release their toxins, and when Porcia's phalanx attacked Bthardamz, the toxins were released. Talym knew that the antidote wouldn't work, but didn't anticipate that it would react violently to the toxins. The false intel cost Porcia's men their lives, and the needless slaughter of priestesses. The event drove her to silence in fear of making similar mistakes, causing her descent into insanity.[9]

At some unknown time, a group of Bretons were infected with a disease of Peryite, known from then on as the Afflicted. Peryite's "blessing" for them was infection with a plague, although they were also granted some amount of resistance to its deadly effects.[10] They had unusually bright red skin and the ability to spit poisonous vomit at their enemies, Originally from the town of Cul Aloue in High Rock, they were 'shepherded' to the Dwemer ruin of Bthardamz.[11] According to Kesh, Orchendor and the Afflicted were "meant to stand ready, awaiting Peryite's command to cover the world with his Blessing." The Afflicted had converted the place comparable to a place of worship, and used the titles of 'monk' and 'apostle', as well as strange draconic totems in their worship of Peryite. They were eventually killed by Peryite's champion in his quest to kill their overseer, the Wood Elf known as Orchendor, as the Wood Elf had betrayed the daedric prince.[12]