The UESPWiki – Your source for The Elder Scrolls since 1995
< Lore: People: T
Jump to: navigation, search

"My warning to you, then, is this: There will always be a devil seeking a bargain, promising to take away your pains. Do not trust them. The past may be the heaviest burden, but it is our burden to bear."— Talym Rend

Talym Rend, also known as the Conqueror of Madness, was a Dunmer hero whose journal was found by the Moth Priest Kellen.[1] Kellen would tell Talym's story revolving around the Shivering Isles, his descent to madness, and his warning.

Talym journeys to the Shivering Isles

Talym Rend served as a master spy for the Third Empire, and after the death of his partner at the hands of the Worm Cult, he jumped at the chance to take revenge.[2] He infiltrated the Cult, but unknown to Talym, they had kidnapped his son, Novos. As part of their initiation, they required him to ritualistically sacrifice Novos to prove his loyalty.[3] His mission cost his son his life, and he lost a second loved one to the Worm Cult. The event would cause him to quit his job as a spy for the Empire,[1] and he returned to Morrowind to bury and mourn his son.[4]

His guilt would prove too much to bear, and to make the pain go away, he tried to bargain with the Daedric Prince Sheogorath. He traveled from Morrowind to an island in Cyrodiil's Niben Bay where he entered the portal to the Shivering Isles.[UOL 1] Many roadblocks laid ahead on his journey to New Sheoth. In one encounter, his coin purse was stolen by a Bosmer by the name of Cyriel.[1] He later discovered that the Fringe was designed to prevent the unworthy from getting further into the isles. The Gates of Madness he had to pass to reach his destination was guarded by the Gatekeeper. Talym used the Gateslayer's Axe, forged and grown from the bones of the previous Gatekeeper in the Garden of Swords, to defeat it.[5][6] Arriving at New Sheoth, Sheogorath denied an audience with Talym, finding him to be a boring character. Sheogorath's chamberlain Haskill suggested to Talym to entertain Sheogorath, by doing some deeds within the isles.[7] On his way to perform these deeds, Talym encountered the Bosmer purse thief Cyriel once again and freed her from the grasps of a giant.[8] Talym then ventured to Notehollow, a grummite cave, and freed the eccentric Orc bard Luzrah Gro-Shar. She was trapped in it's spell as the cave was designed by Sheogorath to draw in musical souls like hers.[9] His final deed came when when Talym encountered the odd Altmer mage Rayvat. He asked Talym to beat up a knight by the name of Tavyar that had been following him, but in reality, Tayvar was the same person and he had a split personality. Accounts conflict, but some say that the Altmer became enraged when Talym told him the truth, making Talym have no choice but to put him down.[10]

After completing the deeds, Haskill contacted Talym, informing him that the Mad God had been entertained and wished to see him. He journeyed back to New Sheoth where he would strike a deal with Sheogorath. Talym wanted him to remove his memories of his involvement in the death of his son, but the price Talym had to pay was for him to drive three souls into madness.[11] Unbeknownst to Talym, Sheogorath tampered with his memory, manipulating him into thinking his son was alive, and that he was fighting to cure his son of madness instead.[12]

Talym's journey brought him to back to the province of Morrowind, near the city of Necrom. His target was the famed Khajiit assassin, Zhanar Tabav, and Sheogorath chose him because he believed that Zhanar not losing sleep over his work was rude. Talym's job was to give Sheogorath a show via a haunting, and to aid him, Sheogorath provided him with familiar companions, the Bosmer thief Cyriel, and the bard Luzrah Gro-Shar.[13] Talym made Zhanar think his long-dead victims came to haunt him. First he caused the foundations of Zhanar's fortress to shake from the fortresses' catacombs.[14] Then moved on to the trophy room where Zhanar kept his victim's gear as trophies. Talym made it seem like phantom weapons had risen, by coating them with blood of his guards.[15] He then donned the guises of the Dunmer heroes, the Hero of Dawn and the Red Avenger, making it seem like Zhanar's famed victims had resurrected.[16][17] At last, Talym was provided a soul gem amulet by Haskill and broke into Necrom's graveyard where he trapped souls of the City's dead.[18] He released the ghosts at Zhanar, who was convinced that the spirits of his long-dead victims had come to get him. The broken Zhanar fled into the night and would live out his days in fear of his long-dead victims.[19]

For his second victim, Talym traveled to another part of Morrowind. His target was the Dunmeri Baron Navir, who Sheogorath thought had everything handed to him.[20] Talym played on his ego, trying to convince the Baron that he was the "Prince of Prophecy" that is capable of performing miracles. The Baron thought Talym was beneath him, and insulted him, calling him a peasant. He took Talym's claim as a joke, and would play along and decreed that his Kwama would lay golden eggs, that the lands of his rival Meliel would be ravaged by his own peaceful netches, and that a terrible blizzard would occur in the summer heat.[21] Talym fulfilled the first task by painting Navir's Kwama eggs gold.[22] The second task he accomplished by scaring Meliel's betty netches, causing them to secrete pheromone oils that turned his bull netches aggressive.[23] The third task was accomplished by breaking into a Telvanni tower and stealing the tower owner's magical amplifier, causing it to snow during the summer.[24] The completed tasks convinced Baron Navir that he was in fact the Prince of Prophecy,[25], and to attack his rival to demonstrate his powers. Talym aided him in the attack on Meliel's garrison,[26] and after it was successful, Baron Navir's ego had inflated massively. He was convinced he could fly, leading him to jump off a cliff in a demonstration, leading to his death. Luzrah was horrified by the act and would no longer follow Sheogorath's bidding, and parted ways with Talym.[27] 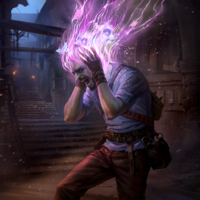 Talym traveled to Skyrim for his last victim. The target was his friend and former employer Porcia Loran, and Sheogorath intentionally had left her for last. Talym begged Sheogorath to keep her out of this ordeal, but he would not budge. Talym had already come this far and would ultimately give into the Prince's demands. To make matters worse, Sheogorath altered the deal and would give Talym only three days to do the job.[28]

Porcia was working on a mission to intercept Reachman intelligence. Talym would play on Porcia's weakness, her job being her life's work. He intercepted a Reachman courier in nearby Druadach Pass, and learned that they had a toxin they planned to transport using Dwemer Animunculi. Cyriel would depart ways with Talym, after getting in an argument with him. She would not be part of the coming slaughter.[29] Talym then infiltrated the nearby Dwemer ruins of Bthardamz, where the Reachmen were stationed, and planted false intelligence about an antidote to their toxins.[30] Porcia had arrived in the scene and was captured by the Reachmen, who had been alerted to Talym's presence. Talym would fight through the Reachmen, releasing her, and would convince Porcia that he had come to her aid.[31] Porcia had read the false intel, and they journeyed to a Grove of Mara where she hoped to obtain the ingredients for the toxin's antidote. The priestesses of Mara refused to turn over the flowers needed for the antidote, leading Porcia and Talym to ponder the circumstances. Porcia came to the conclusion that the lives of her men were valuable, and the Priestesses were going to be killed by the Reachmen anyway, so decided to slaughter them all and retrieve the flowers.[32] Porcia's alchemists mixed the flowers into the antidote, anticipating that the Reachmen would release their toxins, and when Porcia's phalanx attacked Bthardamz, the toxins were released. Talym knew that the antidote wouldn't work, but didn't anticipate that it would react violently to the toxins. The false intel cost Porcia's men their lives, and the needless slaughter of priestesses. The event drove her to silence in fear of making similar mistakes, causing her descent into insanity.[4] When he had done as directed, Talym returned home hoping that Sheogorath fulfilled his end of the bargain, only to realize that Novos had been dead the entire time.[4]

Sheogorath denied Talym another audience when he returned to the Shivering Isles,[33] and so he wandered around the realm aimlessly, slowly driving himself mad with unanswered questions. His old companion Luzrah came to his aid, but he saw her as a grummite in his madness and wounded her. Upon learning of his dire mistake, he regained a semblance of composure and learned from her of a rumor of a powerful warrior imprisoned in Knifepoint Hollow.[34] Arriving there, Talym was informed by Dyus, the librarian of Jyggalag, that he might gain an audience with Sheogorath if he retrieved the Sword of Jyggalag.[35] Talym journeyed across the Isles and discovered the last Obelisk of Order to retrieve the sword from the site. Luzrah departed once again from Talym, figuring that confronting Sheogorath was a death sentence, and was something he had to face alone.[36]

Sheogorath finally granted Talym an audience and used the Memory Wand on him to reveal Talym's original intent and memories. Sheogorath mocked Talym, and in his anger, Talym turned the wand against the Daedric Prince to force him to recall his memories of his previous incarnation: the Daedric Prince of Order, Jyggalag. The memories pained Sheogorath, who pleaded with Talym to stop. He fulfilled Talym's wishes and let him and his companions free from his grasp. After Talym had beaten the Prince of Madness at his own game, he returned to his home in Morrowind to nurse his grief and to plot his revenge against the Worm Cult.[37][38]