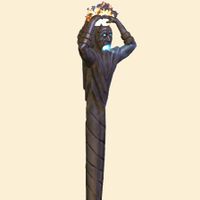 The Memory Wand is an artifact belonging to the Daedric Prince of madness, Sheogorath.

The Dunmer Talym Rend became a pawn in Sheogorath's game when he struck a deal with Sheogorath to forget the painful memories of his involvement in the Worm Cult's ritual sacrifice of his son Novos. Sheogorath manipulated his mind for "motivation," and tricked him into thinking his son was alive, and that he was fighting to cure his son of his madness instead.[1]

The prince requested three souls driven mad in return for restoring Talym's son Novos to sanity. Once Talym had driven his three targets to Sheogorath's embrace, Talym returned home only to realize that Novos had been dead the entire time. When Talym set out to gain an explanation from Sheogorath, he was only turned away. Unanswered questions ate away at his sanity as he wandered endlessly around the Shivering Isles.

Eventually, he regained a semblance of composure and journeyed to Knifepoint Hollow. There, Talym was informed by Dyus, the librarian of Jyggalag, that he might gain an audience with Sheogorath if he retrieved an artifact of Jyggalag. He retrieved the Sword of Jyggalag and confronted Sheogorath. Using the memory wand, Sheogorath revealed Talym's original intent along with his memories. He proceeded to mock Talym, angering him and inciting a duel. The Daedric Prince of madness was defeated when Talym turned the memory wand against him, forcing the Prince to recall his memories of his previous life as the Daedric Prince of Order, Jyggalag, and pleaded for him to stop the madness. He fulfilled Talym's wishes and would leave him and his companions free from his grasp.[2]

This Lore-related article is a stub. You can help by expanding it.
Retrieved from "https://en.uesp.net/w/index.php?title=Lore:Memory_Wand&oldid=2076826"
Categories:
Hidden categories: