New Sheoth is the ever-changing capital of the Shivering Isles and the seat of Lord Sheogorath. It is located in the eastern part of the Isles, at the feet of the Jester's Spine Mountains. It is placed on the border between Mania and Dementia, the two halves of the Isles. The city itself is divided into two districts, Bliss on the Manic side and Crucible on the Demented.[1] New Sheoth Palace overlooks the city; contained within is the Palace of Sheogorath, as well as the Houses of Mania and Dementia. The Sacellum Arden-Sul is located at the base of the Great Torch. The ruins of Xirethard are mostly located beneath the city. Like everywhere in the Isles, root tunnels run deep below the city. Of particular interest is the Fountainhead, where the insanity of the realm's inhabitants settles to supply the waters of the Font of Madness.

Every era, during the Greymarch, the city is destroyed by Jyggalag and the forces of Order along with the rest of the Isles. Prior to the building of New Sheoth, Cylarne was the capital of the realm.[2] New Sheoth survived the Greymarch of 3E 433, when the Champion of Cyrodiil assumed the title of Mad God and freed Jyggalag from his curse. The city was still in existence by 4E 201.[3] 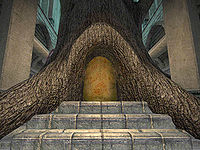 The entrance to the Fountainhead

In 3E 433, the Pools of Madness were tainted by Order. Sheogorath's Champion, who needed to immerse the Staff of Sheogorath in the waters, defeated the Forces of Order and restored the Pools, imbued the Staff with Madness, and assumed the position of Madgod. This gave the Champion the power necessary to defeat Jyggalag, thus ending the Greymarch and the Prince's curse.[5]