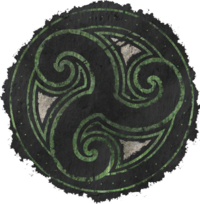 The symbol of Hjaalmarch

Hjaalmarch, or Hjaalmarch Hold,[1] is a lowland coastal hold in Skyrim.[2] Roughly half the hold consists of the Drajkmyr marsh,[3] south of which is the capital and only settlement Morthal (although some farms dot the tundra of Hailstone Valley).[2] The region is veined with waterways that empty into the Sea of Ghosts, and the Skyborn Range further isolates the area from the east and southern border.[4]

Hjaalmarch is home to the Karth delta,[5] also called the Mouths of the Karth,[6] where the mighty Karth River and the smaller River Hjaal empty into the Sea of Ghosts through a variety of intricate channels. The Deathbell flower is known to be abundant throughout the swamps.[7] Many ruins dot the hold, including the legendary Labyrinthian.[8][9] Combined with the fog that surrounds the marshes and the creatures that stalk the land (Wispmothers purportedly originated here), Hjaalmarch is considered one of the more mysterious holds in Skyrim.[8][10]

Hjaalmarch has the lowest taxes of the nine holds, but it is also the poorest hold.[3]

This Lore-related article is a stub. You can help by expanding it.
Retrieved from "https://en.uesp.net/w/index.php?title=Lore:Hjaalmarch&oldid=2585510"
Categories:
Hidden categories: