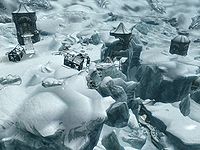 Alftand is a Dwarven ruin found within the Winterhold region of Skyrim. Alftand is unique among dwarven ruins in that it is the only one built partially atop an active glacier. The Dwemer of Alftand have their own unique style of iconography.[1] The Great Lift at Alftand, which leads into Blackreach, can be found in the Pale, overlooking the main road and Lake Yorgrim.

Alftand stretches beneath the southern mountains of Winterhold to its northern entrance atop an active glacier.[1] The city of Alftand is one of the three (possibly four) dwarven cities in Skyrim to contain an entrance to Blackreach,[2] a massive underground cavern inhabited by Falmer, Chaurus, and Dwemer Animunculi.

During the Skyrim Civil War in 4E 201, an ill-fated expedition led by Sulla Trebatius delved into Alftand, only to fall apart deeper inside. That same year, the Last Dragonborn learned of an Elder Scroll hidden in Blackreach that would allow them to activate the Time-Wound at the Throat of the World to learn the Dragonrend shout. The Last Dragonborn was told of the entrance at Alftand by Septimus Signus, although it is unclear whether or not this was the entrance they ultimately used.[3] With this scroll, the Dragonborn learned Dragonrend and began their first battle against Alduin.[4]