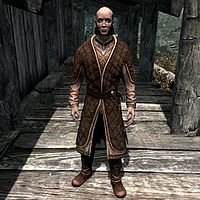 Ainethach is a Breton miner and the owner of Karthwasten and its two mines, Sanuarach Mine and Fenn's Gulch Mine. He has two adult children named Rondach and Voada who work in Understone Keep as the chef's assistants.

As one of the few native Reachmen to own land in the Reach, Ainethach is frequently hassled by both the Forsworn and Nords of Markarth, who both accuse him of having a secret agenda against their respective groups. His mine also makes him a target for the machinations of Thonar Silver-Blood, the leader of the Reach's wealthiest and most influential family. You will encounter him during one such time, as mercenaries hired by the Silver-Bloods, led by Atar, are trying to force him to sell the mine by shutting it down under the pretext of Forsworn activity nearby. You can either aid Ainethach by getting rid of the mercenaries or convince Ainethach to sell his mine to the Silver-Bloods.

Upon raising his disposition, he will become a potential candidate for marriage.

When you first enter Karthwasten, you will find Ainethach along with two of his miners, Ragnar and Lash gra-Dushnikh, having an argument with Atar and his fellow sellswords. After this event is over, he will resume his normal routine. Ainethach begins his day by waking up at 7am and leaving Karthwasten Hall to head outside. He will then spend the next 12 hours working on the exterior of his home, either using a hammer to repair the house or sweeping his balcony. He may also be found taking a break at the table or seated on one of the benches found outside his house. After spending all morning and afternoon outside, Ainethach will head inside his house at 7pm. He will spend the next 5 hours relaxing inside his home, until he goes to sleep at midnight.

Ainethach wears a set of fine clothes and matching boots. He is equipped with a steel dagger and carries a key to Karthwasten Hall and a selection of upper-class items and gold.

"I'm one of the few native sons of the Reach that owns land. It doesn't make me very popular."
"If the Forsworn aren't attacking my town, the Nords are trying to force me off it."
"Finally, both of my mines are open again. Time for everyone to get back to work."

If spoken to directly: 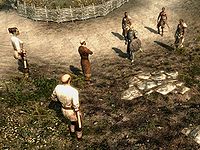 "I want you sellswords out of my mine."

As soon as you enter Karthwasten for the first time, you will find Ainethach arguing with Atar about the occupation of his sellswords inside Sanuarach Mine:

Ainethach: "I want you sellswords out of my mine."
Atar: "Watch your tongue, native. We'll leave when we're sure there's no Forsworn here."
Ainethach: "Oh, and when would that be, I wonder? When I sell my land to the Silver-Bloods?"
Atar: "The Silver-Bloods have made you a very generous offer for this pile of dirt. I suggest you take it."

If you talk to the miners that are currently out of work, they will express their frustration and desire for Ainethach to deal with the situation. You can ask Ainethach if he is having trouble with the mine:

Trouble with the mine?
"Robbery is what it is. The Silver-Bloods are trying to muscle in on my land. Forsworn attack the mines, and suddenly all these sellswords show up to 'help.' They won't let anyone work until I sell it off."

You will then have two responses to choose from:

What if I convince them to leave?

"You can try, but I'd keep your sword-arm ready if things get ugly."

Who are the Silver-Bloods?
"A family of thieves. Running their corrupt empire from Markarth. The Silver-Blood family own half the Reach, and they won't stop until they own all of it."

If you told Ainethach that you will help convince the sellswords to leave, you must now head inside Sanuarach Mine and persuade Atar and his men to leave. Once you have used persuasion or force to clear the mine of the sellswords, you can return to Ainethach and tell him that the sellswords won't be a problem now:

Those sellswords won't be a problem now.
"That won't be the last we hear from the Silver-Bloods, but at least we can get back to work. Thank you. You've done a good thing for me and my workers. Here. This is for you."

He will then give you your reward, a leveled amount of gold.

I think you should sell the mine.
"No. This is my land. You expect me to just hand it over to those Silver-Blood thugs?"

You must then choose one of the following options to persuade him to sell his land:

Once you have persuaded him to sell the mine, you can return to Atar to tell him about your success. Atar will then proceed to give you your share of the cut, which is the same amount of leveled gold you receive if you help Ainethach.

During The Heart of Dibella, if you tell him that you are looking for a young girl that lives around here, he will reply by directing you to Enmon:

I'm looking for a young girl who lives around here.
"Oh, my. You'll want to talk to Enmon about that."