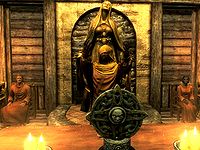 Maramal performs a wedding at the temple in Riften

If you are interested in getting married, you must first speak to Maramal in the city of Riften. He can initially be found in The Bee and Barb tavern preaching to the locals and later at the Temple of Mara. Talk to him about marriage and he will instruct you to obtain an Amulet of Mara; a holy symbol of the goddess of love. At this point, you may purchase one from him for a small fee, or find one in random loot throughout the game. Any Amulet of Mara will do, so if you already have one before speaking to Maramal, there is no need to buy one.

Now you must find an NPC in whom you have an interest (A list of eligible NPCs can be found here). The person that you wish to marry must have a high disposition towards you. This can be achieved by doing favors and completing quests for that character. When you have met your ideal spouse, you must approach them while wearing the amulet. This will give you new dialogue options concerning marriage. Ask the person to marry you. If they agree, you will need to organize a wedding ceremony. Return to Maramal to tell him that you are interested in getting married at the Temple of Mara. He will be delighted and will announce that the wedding will take place the very next day; from dawn until dusk.

Early the next morning your spouse will be waiting for you in the Temple of Mara. Upon entering the building, you will walk down the aisle and take part in an age-old tradition between two people. You will be required to say your vows, with prompting by Maramal. You are now legally married! The first decision you must make is where to live. You may live in your spouse's home or any house that you have purchased. This decision is not permanent; if at any time you want to change residences, choose the "I'd like us to move somewhere else" dialogue option.