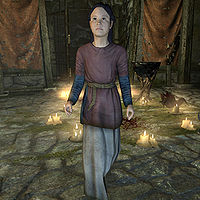 Fjotra is a Nord child who is initially found in Broken Tower Redoubt. She has been kidnapped by a group of Forsworn and imprisoned in their redoubt. She is the daughter of Enmon and Mena from Karthwasten.

She is the new sybil of Dibella, and you will be tasked with bringing her back to the Temple of Dibella in Markarth.