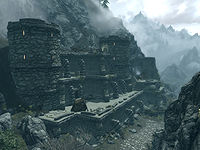 It lies along the road between Karthwasten and Rorikstead. It is a dangerous place, making travel between the two towns a hazardous undertaking. The guards of Markarth know this and will inform you of the danger, stating, "Beware the region northeast, across the river. Forsworn have taken refuge in Broken Tower Redoubt and Red Eagle Redoubt."

Just past the western edge of the fort there are two blue mountain flowers, a purple mountain flower, and two juniper trees growing by a dirt path. The path leads to Liar's Retreat.

There is one Forsworn patrolling outside the fort on the road. There are another two Forsworn on the middle level exterior that will attack with bows. If they lose sight of you, they will descend through the ground floor and try to find you. There is a blue mountain flower growing by the door, and two purple mountain flowers grow near the western end of the fort. 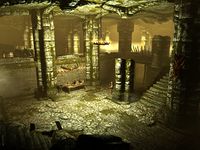 The main room of the fort

From the main part of the room there are two sets of stairs. The one to the north has collapsed, but the one to the south is still intact. At the far end of the left-hand side on some fallen masonry are two bottles of alto wine, and hiding between two barrels is a Dibella statue, while to the right-hand side is a door leading further into the fort. In the next corridor, there is a spiked wall trap with two pressure plates, one on either side of the trap. The first is hidden in some hay by two barrels on the approach and has a table next to it holding a bottle of Alto wine, a wooden plate with a salmon steak and raw salmon meat on it, and a large coin purse. The second is beside another two barrels around the corner, just before the end of the spiked wall located to the right.

After this is a corridor running in a semi-circle around a circular room. There is a Forsworn patrolling the corridor, which has two doors; one to the north that leads outside to the exterior middle level, and one to the east leading back to the main room. There are two single beds and four bedrolls, all unowned, in the circular room. On the shelves to the left from the first entry are a copy of the Block skill book The Mirror, a frenzy poison, a satchel, an empty strongbox, and bottles of alto wine and wine. On the cupboard shelf after that are a solution of enhanced stamina (worth over 1,000 gold), several bottles of alto wine and wine, and a bowl on top. By the end of the bed beside the cupboard is a crate with three loose septims, a large coin purse, a silver ring, and sometimes a random potion on top, and by the other bed are a novice-locked chest and a table with a mead barrel and a bowl containing bread. There are also a wardrobe and a second table in the room.

The corridor to the east leads back to main room, above the collapsed staircase. There is a table with a random potion of healing and a bottle of alto wine. The corridor leads to the base of the east tower, passing another exit to the middle exterior level on the left which has a barrel with a salt pile on top next to it. By the base of the stairs are a table with a salt pile and a drum on top, as well as some shelves with three garlic, three loose septims, other food, a flute, and another drum. Halfway up the stairs is a tripwire that activates some falling boulders. A Forsworn patrols this part of the stairs, and can be killed by triggering the tripwire at the appropriate point. This may alert two other Forsworn in the area at the top of the stairs.

At the top of stairs is a room where another Forsworn waits. There are two unowned single beds in the room, and a table with a random potion, a bunch of jazbay grapes, a haunch of venison, a bowl of tomato soup, and a honey nut treat. There are another bowl of tomato soup and a fillet of salmon meat on some cupboard shelves, a set of shelves holding two flutes and drums, and an unlocked chest by one of the beds. There are more stairs on the other side of the room, with a pickaxe on the ground by their base, leading up to a third exit, past a final Forsworn. 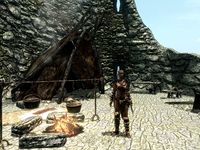 The camp on the second level

The middle level of the exterior is guarded by two Forsworn, one to the east and one to the west. On the eastern side are an empty table and a simple tent with a bed roll. On the western side is a small camp, with a cooking pot, a grindstone, two hay piles, and a table with three iron swords, an iron war axe, and a random war axe on top and a pair of iron boots underneath. There are two entrances to the interior from this level, one at each end.

The top level exterior is the only way to get to the top of the western tower. It is guarded by a single leveled Forsworn, and there are two tables: one with a hunting bow and forsworn arrows (which may have fallen through the table and be underneath), and the other with a random leveled potion. 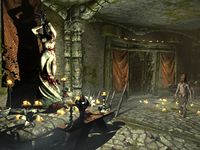 The Briarheart and the desecrated statue

The top level of the tower contains a desecrated statue and shrine to Dibella, guarded by a Forsworn Briarheart; there is also a lightning rune in the middle of the room. The top level is split into the main chamber and a side bedroom. There is an expert-locked cell off the main room that is empty (unless you are here to rescue someone for a quest, in which case they will occupy this cell); the Briarheart carries a key that unlocks the cell.

There is a table to the left of the entrance that holds a decapitated skeever, a copy of the conjuration skill book Liminal Bridges, a random healing potion, two pieces of canis root, and a copy of Ancestors and the Dunmer. There are two random frost weakness poisons, a bottle of wine, and two bottles of alto wine on the shelves beside that. On the floor there are seven sprigs of snowberries and a bunch of jazbay grapes leading to the statue and shrine of Dibella. Beside the entrance to the bedroom is another set of shelves containing three flutes and two drums, with a lute next to it.

The bedroom, located to the north, has an unowned double bed, an unlocked chest, a table, a cupboard, and an end table with some cheese on top. On the table are a bowl of beef stew, a silver emerald necklace, two bottles of alto wine, a copy of The Firmament, a bowl of potatoes, a plate holding a grilled chicken breast, and a troll skull. On the cupboard shelves are a random magicka potion, two leather strips, a canis root, a sweet roll, and some horse meat.