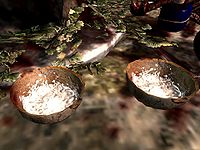 Salt Piles are potentially more valuable for cooking than for alchemy, since salt is a necessary ingredient in most cooking recipes. Accordingly, it is categorized as raw food as well as an ingredient, meaning it can be traded with innkeepers as well as apothecary merchants. It cannot be harvested in Skyrim.

In terms of combinations of two ingredients, Salt Piles can be combined with 38 other ingredients.

350 guaranteed samples can be found in 162 different locations. Locations with the greatest numbers are:

Nearly all innkeepers and apothecary merchants are guaranteed to sell 1-6 salt piles. In addition, salt can commonly be found in many containers. Fish barrels always contain 1 salt pile, as do certain barrels that are internally identified as meat barrels. Standard food barrels and most small sacks have a 40% chance of containing 1-3 salt piles.

Of the 18 cooking recipes available to the player, all but three require salt, making it easier to list the three exceptions (Elsweyr fondue, horker stew, and vegetable soup). The recipes that require salt are:

Salt can also be used at the Atronach Forge:

Salt can also be used at the imbuing chamberDB in White Ridge Barrow to create spider scrolls:

There is a second variety of salt pile which shares all the same alchemical properties as a regular salt pile. This salt pile cannot be used for cooking, and is worth one less gold than a normal salt pile. It can only be found inside the Black-Briar Manor in Riften, but it cannot be reached without the use of glitches or console commands.