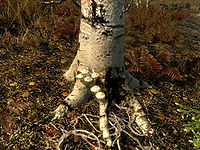 Scaly pholiota on a birch tree

Scaly Pholiota is a fungus found on tree stumps and fallen trees, particularly in the birch forests of the Rift.

In terms of combinations of two ingredients, Scaly Pholiota can be combined with 34 other ingredients.

180 scaly pholiota fungi are found in 41 different locations. Locations with the greatest numbers are: