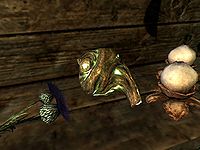 Taproots are dropped by spriggans.

Taproots have all the same effects as Dwarven oil, allowing you to make a potion with all four effects.

In terms of combinations of two ingredients, Taproot can be combined 46 other ingredients.

Taproots are dropped by all varieties of spriggan, including spriggan matrons and spriggan earth mothersDG.