It is situated in the central market square in Raven Rock between Glover Mallory's house to the southwest and the Alor house to the northwest.

To the left of the entrance is where Milore sells her wares, she has an alchemy lab set up outside. To the right of this is an open crate containing a skirmisher's draught, a potion of minor well-being and an elixir of haggling. There is a second open crate beside this containing four torchbug thoraxes and a bowl of fire salts. Two barrels are immediately to the left of the door and on one of these are three more bowls of fire salts. To the right of the entrance is where Garyn sits all day selling his wares, there is an open empty chest and several crates here, with a long open crate containing fourteen ash yams and an urn with foodstuffs on this side of the entrance. With the entrance to the field planted with ash yams to the right. 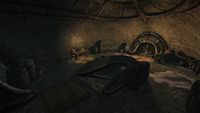 The entrance has an apprentice lock. Upon entering you enter into a typical raven rock house, with the kitchen and storage area on the ground floor and bedrooms and work areas in the basement. To the left are a collection of barrels and crates. On one of the crates is a copy of The Poison Song, Book III. To the right is an open crate containing four ash yams. Next to this is a long wooden table with two chairs. On the table are two goat cheese wheels, three loaves of bread, a goat cheese wedge, an apple pie, a bottle of shein, a bottle of sujamma, a bottle of Nord mead and a basket containing three ash yams. There is a medium coin purse on top of a barrel to the right of this with an urn on a barrel beside it. There is then a bench and another barrel before the fire place. There is a chair and cooking pot on a stand in front of the fire. Continuing around, next there is a round wooden table and two chairs. On the table is a bottle of shein and one of sujamma, and a note to Milore from Nilara. Behind the table is an urn with a narrow table beside it. Next to this is a set of shelves holding two bottles of wine and three of alto wine. Between this and the entrance are a collection of crates, barrels, sacks, two open crates containing a total of twelve ash yams and finally a pile of firewood with a woodcutter's axe among them. As is normal with these house the stairs down are in the center of the room, with barrels, a pile of firewood including two loose pieces and a bench around the surround. There is a bottle of shein on the edge of the stairwell and a copy of The Poison Song, Book II on one of the barrels. 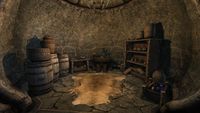 At the bottom of the stairs are two urns on the right. To the left are a total of five barrels all containing ingredients. There are copies of The Poison Song, Book IV and The Red Year, Vol. I, an urn and a wooden bowl containing three slaughterfish eggs on top of some of these. To the right of these is a set of shelves containing a falmer ear, three Felsaad tern feathers, two salt piles, a sample of frost mirriam, a creep cluster, a dragon's tongue flower, and a potion of light feet. To the right is an alchemy lab with a potion of illusion on top. Further to the right is another set of shelves containing two skeever tails, a bowl of frost salts, three taproots, a canis root, a falmer ear, two potions of minor healing and one of minor magicka, a potion of resist shock, a bowl of bone meal, a potion of cure disease, and five sacks of foodstuffs. Next to the shelves is an open crate containing three deathbell flowers, a sample of fly amanita, and a sample of Namira's rot. 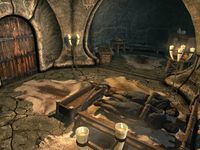 Opposite the stairs, to the west is a wooden door to the bedroom. Through the door the bed is in front of you. Around the room, starting to the left is an unlocked chest, a table with an empty petty soul gem and three lockpicks, a bench and a set of shelves containing two bottles of shein, copies of The Real Barenziah, v1 and v2, Ancestors and the Dunmer, and The True Noble's Code. Next to this is a round wooden table and chair. To the right of the bed are a couple of barrels, then a table and two chairs. On the table are four loose coins and copies of The Axe Man and Myths of Sheogorath. To the right are two more barrels. There are four stands with goat horns for light in the bedroom.

On the right as you descend the stairs are three round ash piles growing fifteen ash yams and nine scathecraw plants. Among them are several open crates and baskets all with ash yams in them totaling thirty ash yams, five urns and five straw bales are also in the area and finally a long wooden table containing two ash yams, a scathecraw sample and a bottle of sujamma.