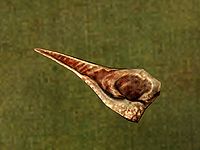 Falmer Ears are dropped by dead Falmer. They are not related to elves ear, which is a plant as opposed to an actual ear.

In terms of combinations of two ingredients, Falmer Ears can be combined with 48 other ingredients.

43-46(DG) guaranteed samples can be found in 17-18(DG) different locations. Locations with the greatest numbers are:

All Falmer, including Falmer Nightprowlers and Falmer Shadowmasters, have a 63% chance of dropping 1-2 Falmer ears. The best place to find them is in Falmer hives.