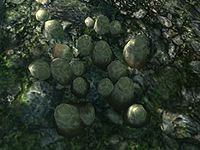 Slaughterfish Eggs can be acquired by harvesting a slaughterfish egg nest, found underwater or sometimes half-submerged in water.

In terms of combinations of two ingredients, Slaughterfish Eggs can be combined with 33 other ingredients.

116 guaranteed samples found in 33 different locations. Locations with the greatest numbers are: 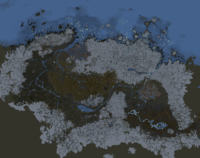 A map of all slaughterfish egg clusters in Skyrim's overworld.

606 slaughterfish egg nests are found in 89 different locations. Locations with the greatest numbers are: