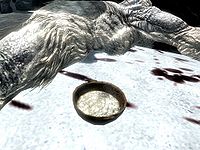 A bowl of troll fat

Troll Fat is dropped by trolls.

In terms of combinations of two ingredients, Troll Fat can be combined with 45 other ingredients.

83 guaranteed samples can be found in 53 different locations. Locations with the greatest numbers are:

Troll fat is dropped by all varieties of troll, including frost trolls, the Guardian Troll Spirit, and Udefrykte.