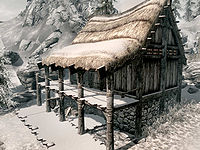 The Mortar and Pestle

The Mortar and Pestle is the alchemy shop in Dawnstar, located between Brina's House and Beitild's House.

It is run by the elderly Frida who also lives above the main trading room. It consists of one area, The Mortar and Pestle.

NOTE: Like all other stores, The Mortar and Pestle has a number of fixed wares on display scattered around the main trading room. These can be bought from the proprietor Frida and will disappear from the room when purchased. For a list of these special items, see this section.

Frida sleeps in her owned bed on the second floor, where even more beverages sit on some shelves next to a respawning food barrel in the northeastern corner: six bottles of wine and two bottles of alto wine. A dinner table is set with two wedges of goat cheese and one eidar cheese wedge, with two loaves of bread on the side. There is also a chicken's egg and two bottles of alto wine. A non-respawning dresser in the corner holds clothes and on its top sit a few spare ingredients: one nirnroot, one creep cluster, one deathbell, and one sample each of frost salts, fire salts, ectoplasm and bone meal. On the other side of the bed are five gold coins on a table and a non-respawning unlocked chest. 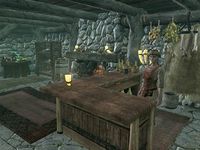