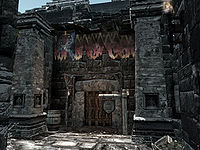 Sadri's Used Wares is a general shop in the Gray Quarter of Windhelm.

It is owned by Revyn Sadri, a Dunmer trader and common level trainer for Speech. It consists of one area only, Sadri's Used Wares.

NOTE: Like all other stores, Sadri's Used Wares has a number of fixed wares on display scattered around the main trading room. These can be bought from the proprietor and will disappear from the room when purchased. For a list of these special items, see this section. 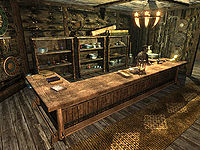 Without the displayed merchandise the main trading room becomes quite empty and consists mostly of valuable kitchen utensils. The huge counter has a copy of Ancestors and the Dunmer on top and, hidden behind the counter, a copy of the Speech skill book 2920, Second Seed, v5. A few weapons are hung on the southeastern wall, including an iron war axe, a steel greatsword, an iron battleaxe, and an iron sword, along with three shields, an iron shield, a hide shield, and a banded iron shield. Through the doorway to the south is a storage room with a wardrobe with random clothes, an end table with clutter, and the store's strongbox on a set of shelves.

The doorway to the north leads to Sadri's private quarters where he sleeps every night between midnight and 8am. The southwestern corner contains a small table with a salt pile, a goat cheese wedge, a slice of bread, and some baked potatoes. Along the western wall is a cooking pot. The adjacent corner has two food sacks and some shelves with several items, including an apple pie, a gourd, a sample of scaly pholiota, a sample of troll fat, three red apples, a bottle of Nord mead, and the Business Ledger. The owned bed stands along the northern wall, with a handy bottle of wine next to the pillow. The northeastern corner has a wardrobe with some assorted clothes. A dresser along the eastern wall contains clothes and has another bottle of wine and a bottle of Nord mead on top.

This is the merchandise found in Sadri's merchant chest. These items are only available if purchased from the merchant; they cannot be pickpocketed or stolen. They are restocked every two days.