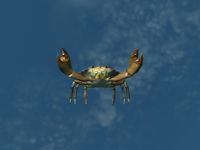 Juvenile Mudcrab is an ingredient added by the Fishing Creation. It can be caught by fishing or picked up by hand near Mudcrab areas.

During the related quest, you will be directed to a fishing spot west of Broken Fang Cave to obtain a Juvenile Mudcrab. However, they can also be caught elsewhere.

In terms of combinations of two ingredients, Juvenile Mudcrab can be combined with 43 other ingredients.

This Skyrim-related article is a stub. You can help by expanding it.
Retrieved from "https://en.uesp.net/w/index.php?title=Skyrim:Juvenile_Mudcrab&oldid=2561724"
Categories:
Hidden categories: