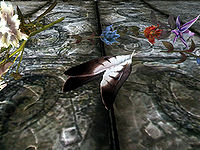 Hawk Feathers can be found on dead hawks along with hawk beaks.

They have Cure Disease as their first effect, making them as effective as a Cure Disease potion as the effect is not magnitude-dependent. They are a lightweight and cheap alternative to the potion, which is probably why Silver Hand members frequently carry them.

In terms of combinations of two ingredients, Hawk Feathers can be combined with 28 other ingredients.

It is categorized as an uncommon ingredient, meaning that all apothecary merchants have a 15% chance of carrying 1-5 samples. In addition, it may be randomly found in uncommon and rare apothecary's satchels. Other possible locations for already harvested samples include:

Hawks can be seen flying in the sky or found near their nests. When shot down, each hawk can be looted for three hawk feathers and one hawk beak. There are 67 nests where hawks can spawn, in 17 different locations. Locations with the greatest numbers are: