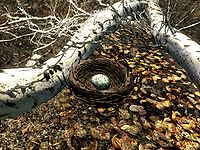 Rock Warbler Eggs can be harvested from birds' nests that are found in rocky regions, notably throughout the Reach. Pine thrush nests (yielding pine thrush eggs) are named identically to rock warbler ones ("Birds' Nest"), but are more common in forested regions.

In terms of combinations of two ingredients, Rock Warbler Eggs can be combined with 49 other ingredients.

102 guaranteed samples found in 58 different locations. Locations with the greatest numbers are:

The birds' nests that yield rock warbler eggs are most common in rocky regions. There are 133 such nests, found in 46 different locations. Locations with the greatest numbers are: