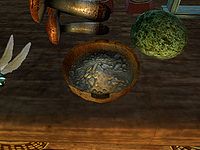 In terms of combinations of two ingredients, Bone Meal can be combined with 41 other ingredients.

Bone meal is always dropped by dragon priests, including all of the named dragon priests who carry masks. Nearly all other types of undead have a 25% chance of dropping bone meal, with the exception of ghosts (who drop ectoplasm) and zombiesCC (who drop mort flesh) . This includes all varieties of draugr, skeleton, corrupted shade and wrathmenDG, as well as numerous named undead creatures and already-dead versions of the creatures.