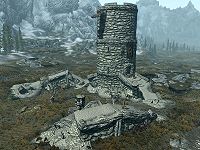 Western Watchtower is a small fort just west of Whiterun.

It is situated along the main road heading west from Whiterun, allowing the Whiterun city guard to watch for any potential threats approaching from that direction.

The tower can be entered via the crumbling wall that forms a ramp upwards. The area between the fallen walls contains two burnt corpses with loot, a training dummy, and the charred remains of a wooden hut. Inside the tower are two unowned bed rolls and a small table with a lantern. The second floor contains an archery target and a bale of straw, while the top floor is empty. There is an Imperial Legion banner flying from the tower.

Once the quest Dragon Rising is complete, four Whiterun guards will be stationed at the tower to keep watch for enemies (see bugs).