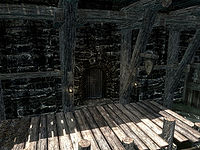 Elgrim's Elixirs is a damp alchemist's shop located on the lower level, by the canal that flows through the center of the city of Riften. Owned and run by Elgrim and his wife Hafjorg. It is opposite the entrance to Beggar's Row, near the northern watergate to Lake Honrich.

The proprietor Elgrim praises its location as ideal for keeping his ingredients fresh, but his wife, Hafjorg, complains that it is merely the only location he could find that they could afford. Elgrim and Hafjorg both sell merchandise, although they share the same merchant chest and basically the same purse. Ingun Black-Briar is also found in the store during the standard opening hours, as she is apprenticed to Elgrim, who is training her to be an alchemist. 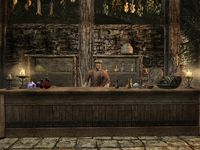 Upon entering, the shop counter is in front of you in an L-shape coming out from the end of the partition wall. Hanging above the partition wall are three pheasants, two rabbits, three garlic braids, four bunches of elves ear, and two bunches of frost mirriam. Behind the counter are two sets of shelves holding a selection of ingredients, potions, and poisons that are displayed merchandise. On the counter are more items that are displayed merchandise, including those hidden inside a stone bowl on the counter or hidden under the counter, along with an iron dagger, a giant's toe, and a copy of Nords Arise!. In the southeast corner is an alchemy lab, with a barrel containing ingredients behind it.

There are two chairs with a small table between them in the northwest corner, with a pile of firewood behind. There is a large fireplace in the west wall, with a wall shelf to the left holding a bottle of wine, and a pile of food sacks underneath. In the southwest corner is a crate with a bunch of lavender on top, and a small round wooden table and three chairs in front. On the table is a seared slaughterfish, a salmon steak, a sweet roll, and a bottle of wine. Near the middle of the south wall is a cooking pot on a stand with food sacks next to it. 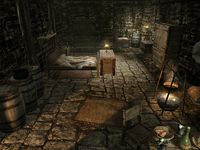 Against the back of the partition wall are three barrels, two of which contain food, while the third contains ingredients. On top of one of them is a copy of Palla, volume 2. To the right, in the middle of the wall is a double bed coming out from the wall with an end table holding an apprentice-locked strongbox to the right, a wall shelf above holding a bottle of alto wine, a dresser at the foot of the bed holding a bunch of tundra cotton, and a medium coin purse on the floor. Opposite, against the south wall is a wardrobe containing clothes, with Ingun's Alchemy Chest (see notes) to the left, along with a food barrel with a bottle of Nord mead on top in the southeast corner. Against the east wall is a crate, with the business ledger on top and a wardrobe to the left.