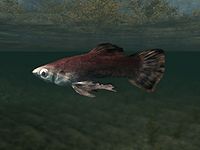 In terms of combinations of two ingredients, Cyrodilic Spadetail can be combined with 44 other ingredients.